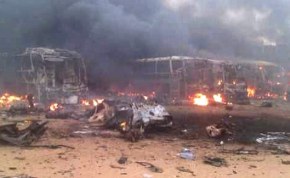 20 March 2013, Lagos – Transport facility operators in Nigeria have been advised to urgently protect the facilities against the terrorist threat.

He also called for proper protection of railway terminals, river transport jetties and airports throughout the country.

Ekhomu said that since transportation infrastructure has been targeted by Boko Haram terrorists, there was a need to beef up security at these terminals in order to arrest future terrorist bombings.

He called for the following security measures in transport terminals: passenger identification card enforcement, body search, use of hand-held metal detectors, use of bomb-sniffing dogs, hand search of carry on luggage, etc.

He also called for the application of CPTED principles such as structural barriers, speed brakes, concrete bollards and blast curtains in order to defend transportation infrastructure against terrorist attacks.

West Africa’s first chartered security professional Ekhomu said that transportation systems needed to be competently protected since they formed a part of the national critical infrastructure.

Such protection will increase their resilience against terrorist attacks. He said that it was obvious that the terrorists were intent on destroying the productive base of the Nigerian economy hence the infrastructure attack.

Ekhomu, who is also President of the Association of Industrial Security and Safety Operators of Nigeria (AISSON) commiserated with families that lost loved ones in the multiple suicide bombings in Kano.

He said that although most of the victims were southerners, there was no need to fan the embers of disunity by hinting at reprisal attacks. Said he: “Boko Haram is a merciless, equal opportunity killer”.

He said that Boko Haram had an anti-Nigerian agenda. It is the duty of all patriotic Nigerians to fight terrorism.

Analyzing the delivery of the bombs at the luxury bus park on New Road, Sabon Gari, Kano, Ekhomu said that there were obsersable and exploitable vulnerabilities which the terrorists cashed in on.

He called for robust risk mitigation strategies in order to save lives. He added that target-hardening the facility would deter some of the attackers.