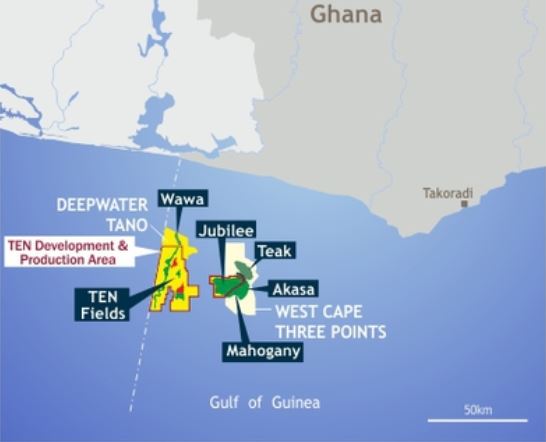 17 January 2018, Sweetcrude, Accra — ExxonMobil will sign a petroleum agreement with Ghana on Thursday, January 18, 2018, in Accra.

The signing is the conclusion of a Memorandum of Understanding, MoU which started on April 30, 2015, between the then Minister of Petroleum and the Ghana National Petroleum Corporation, GNPC.

Upon signing of the agreement, ExxonMobil gets an exploration and production license over the Deepwater Cape Three Points, DWCTP block in the ultra-deepwater zone of between 2,000 and 4000-meter water depths in Tano basin, located approximately 150km offshore Ghana.

The DWCTP is one of the ultra-deepwater blocks which severely tests the limits of modern technology and would take research and development to optionally develop and exploit any discovered resources.

“It is one of the ultra-deepwater blocks which severely test the limits of modern technology and would take Research and Development to optimally develop and exploit any discovered resources”, the petroleum ministry said in a newspaper advertisement.

“Pursuant to the terms of the MoU, the parties agreed to negotiate in good faith a Petroleum Agreement, with an exclusivity period of seven months”.

“Ghana is one of a few African oil producer countries without the presence of a super major”, the Ministry of Petroleum said.

However, the deal has faced criticisms by some civil society groups on why the government did not open the oil block to public tender.

This prompted the government to start giving details of what was contained in the agreement just a few days to the signing.

According to Ghana’s government, the content of the deal was shielded from public tender “because the nature of the area required an oil exploration firm that has the most sophisticated technology and the financial muscle to prospect for oil in commercial quantities”.

Exxon’s success comes on the heels of Vannco Energy (Pan Atlantic) and Lukoil had challenges in exploring for oil because of the nature of the oil block.

According to the Ministry of Energy in a publication in the Daily Graphic, “The reasons for inviting ExxonMobil for direct negotiation are based on the value proposition for Ghana.”