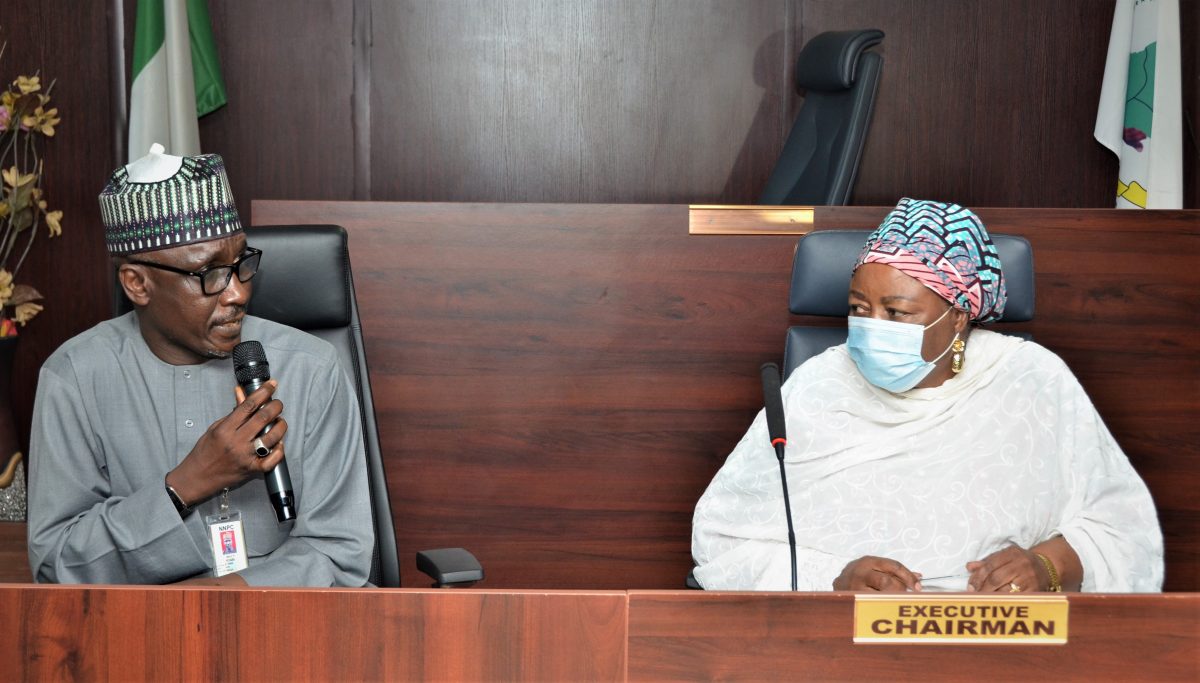 *NNPC GMD, Mallam Mele Kyari (l), briefing the Executive Chairman of the Federal Character Commission, FCC, Dr. Muheeba Farida Dankaka (r), on the operations of the Corporation during the visit to the Commission recently.

Lagos — The Federal Character Commission, FCC has applauded the Nigerian National Petroleum Corporation, NNPC for ensuring a high level of gender balance in management positions in the Corporation.

The Executive Chairman of the Commission, Dr. Muheeba Farida Dankaka gave the commendation in Abuja during a courtesy visit by the management of NNPC led by the Group Managing Director, Mallam Mele Kyari.

A press release by the Corporation’s spokesman, Dr. Kennie Obateru stated that the FCC boss also congratulated NNPC on the recent flag-off of the Ajaokuta-Kano-Kaduna, AKK gas pipeline project.

Dr. Dankaka, who informed that her Commission’s mandate extends to equitable distribution of social and infrastructural amenities said the AKK project was one that could boost the nation’s economy and wellbeing of Nigerians.

The FCC boss also disclosed that the recent recruitment by NNPC was transparent and ensured equal opportunity for all Nigerians, adding that the Corporation fully complied with FCC guidelines in the exercise.

In his remarks, the Group Managing Director of the NNPC, Mallam Mele Kyari, stated that the national oil company, as a responsible corporate entity has always provided a level playing field for all thereby granting equal employment opportunity to Nigerians from all classes and backgrounds.

“On the issues around inclusion and physically challenged, as a matter of fact, today in our employment we have people in wheelchairs, the blind and other physically challenged. We are one of the institutions of government with the highest number of women in management,” the GMD stated.

Kyari said that contrary to false claims in some quarters, each geopolitical zone of the country is represented at the top management of NNPC, stressing that there is fair play in the Corporation’s appointments.

He said NNPC would continue to work towards achieving the government’s 35% affirmative action of women in public service.

He said NNPC would continue to comply with the rules and regulations of the Commission on recruitment.