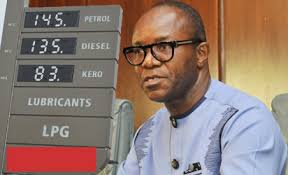 07 January 2017, Sweetcrude, Abuja – The opposition Peoples Democratic Party (PDP) has told the Federal Government to forget about hiking the price of fuel from the “already exorbitant” N145 per litre, saying such would not only be criminal, but inhuman and completely unacceptable.

The PDP has therefore asked Nigerians to reject any attempt by the federal government to hike the pump price of petrol.

The party said investigations had shown that the Federal Government had been lying to Nigerians on oil-related issues while using the NNPC to bandy about figures with the intention to arrive at government’s predetermined agenda to increase the price of fuel.

The PDP further alleged that the lingering fuel crisis and its attendant black market costs were only a ploy by the All Progressives Congress-led Federal Government to justify their intended hike of the price.

PDP National Publicity Secretary, Mr. Kola Ologbondiyan, in a statement in Abuja on Friday, said the APC-led government had completely become numb to the sufferings of Nigerians to the extent that it no longer cared about imposing more hardship on the people.

He added that hike in fuel pump price would be an indirect tax on Nigerians, thereby increase their suffering.
He called on the government to come up with a clear explanation on “oil subsidy payment” under the administration and “illegal lifting of N1.1 trillion worth of crude using unregistered companies”.

He said instead of making the people suffer more, the Federal Government should come out clear on sleaze in the oil sector under its watch, particularly the shady oil subsidy payouts and illegal lifting of the N1.1tn worth of crude using unregistered companies.

Recalling that Vice President Yemi Osinbajo had in December informed Nigerians that the NNPC had been paying subsidy on fuel, Ologbondiyan said the Federal Government had refused to tell Nigerians the beneficiaries, the amount involved and who authorised the payment because of the inherent corruption in the deal.

Ologbondiyan said the federal government was yet to tell Nigerians who the beneficiaries of the subsidy were, the amount involved and who authorised the payment.

“Any increase in fuel pump price would be an indirect tax on Nigerians to fund APC interests and, considering the pains Nigerians have suffered under this … government, this intended hike will be callous,” he said.

According to him, “It is now clear to all that this APC-controlled government will never act in the interest of Nigerians. All the actions and policies of APC, in their close to three years in office, have been targeted against Nigerians and there are no signals that they will change.

“We, therefore, urge Nigerians to reject this plot to raise the prices of petroleum products even as they gear towards using the next election to end the misrule of the APC.”