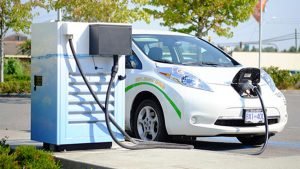 Detroit — Ford Motor Co on Thursday announced a series of deals to accelerate its shift to electric vehicles, including sourcing battery capacity and raw materials.

The deals are part of Ford’s push to have its annual EV production rate globally reach 600,000 vehicles by late 2023 and more than 2 million by the end of 2026. Ford said it expects a compound annual growth rate for EVs to top 90% through 2026, more than doubling the forecast industry growth rate.

“We are putting the industrial system in place to scale quickly,” Ford Chief Executive Jim Farley said in a statement.

In March, Ford boosted its planned spending on EVs through 2026 to $50 billion from its prior target of $30 billion, and reorganized its operations into separate units focused on EVs and gasoline-powered vehicles with Ford Model e and Ford Blue, respectively.

The Dearborn, Michigan-based company also said at the time that its EV business would not be profitable until the next-generation models begin production in 2025.

As part of its push to boost capacity, Ford said it is adding lithium iron phosphate (LFP) cell chemistry for EV batteries to its portfolio, alongside nickel cobalt manganese (NCM). Ford said it has secured all of the 60 gigawatt hours (GWh) of cell capacity needed to support the 600,000 run rate.

The company is also working with LG Energy Solution and its long-time battery partner SK Innovation.

Ford said it has now sourced about 70% of the battery cell capacity it needs to achieve its annual production rate of more than 2 million by late 2026.

To support the battery cell deals, Ford said it is direct sourcing battery cell raw materials as well, announcing deals to acquire most of the nickel needed through 2026 and beyond through agreements with Vale Canada Ltd, PT Vale Indonesia, Huayou Cobalt and BHP.

It has also locked in lithium contracts through agreements with Rio Tinto, Ford said.