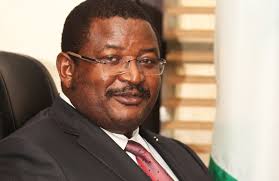 He has also lamented his continued stay in the custody of the Economic and Financial Crimes Commission, EFCC.

Yakubu said while no formal charges had been brought against him, he was being denied an urgently-needed medical attention.

Andrew Yakubu, is being detained by the EFCC following an alleged recovery of over $9.7million and £74,000 cash from a property linked to him.

In a statement by his lawyer, Mr. Ahmed Raji, SAN, in Abuja, the former NNPC boss noted that “within this time also, our client has been denied access to adequate medical attention which he desperately needs.”

Reacting to the widespread media reports alleging that his client was currently facing charges for under-declaration of assets and illegal transactions, the lawyer stated that “within this time, no formal charges has been brought against our client by the EFCC or any other government establishment for any offence whatsoever as widely spread in these media reports.”

Raji said, “In view of the foregoing facts, our client has sought an enforcement of his fundamental human rights before the Federal High Court, Abuja in an action constituted as FHC/ABJ/CS/126/17 between Engr. Andrew Yakubu vs EFCC & Anor.

“Our Client has been detained by the Economic and Financial Crimes Commission (EFCC) for more than a month since he voluntarily presented himself to them at their invitation and has fully cooperated with investigations.”

While stating that it had become necessary to set the records straight, Raji maintained his client’s “insistence on his innocence of any perceived offence and his determination to clear his name in due course.”

Meanwhile, EFCC sources have disclosed that the former NNPC boss is refusing to tell the anti-graft commission those he claimed gave him the $9.7million cash seized from his house in Kaduna.

It would be recalled that Yakubu, in a suit against filled at the Federal High Court, Abuja, asked the court award N1 billion against the EFCC as damages and compensation for violation‎ of his rights revealing that the money recovered by the commission were gifts.

According to reports, the EFCC needed Yakubu to list his benefactors to enable it crosscheck whether or not those affected did him any favour.

“We suspected that the cash came in between 2012 and 2014 but Yakubu has refused to disclose the sources. Maybe when his trial begins, he will open up in court. We believe he owes it a duty as a citizen to name those who showered the huge gifts on him.

“Apart from that, since the gifts allegedly came while in office, the constitution makes it mandatory for him to declare them and the sources,” the source stated.

His counsel, Ahmed Raji (SAN), however declared that there is no law requiring the suspect to disclose those who gave him the money insisting that the bulk of the cash was given to Yakubu during socials and as sympathy gift after he left office.

“There is no law that says that Andrew Yakubu must disclose the sources of the gifts. This is more so because he is no longer a public servant,” he said.

“It is like asking him to prove his innocence. Is there any money missing? He does not owe the EFCC any duty to submit the list of those who gave him gifts.

“You can declare gifts if you are only a public servant. My client told me that the bulk of gifts came after he had left office during ceremonies, occasions and as sympathy gifts because of the way he was sacked.

“The burden of proof is on EFCC if any money is missing or any money has been stolen. Yakubu is no longer a public servant.”

Meanwhile, Yakubu has been relocated from Kano to Abuja in readiness for his arraignment this week as the EFCC has filed a six-count charge against him.

A court has already ordered that the $9.7million and £74,000 impounded from him be forfeited to the Federal Government for the meantime.