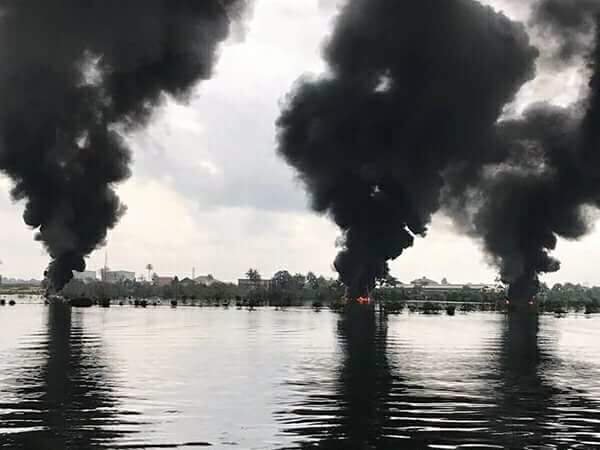 *One of the sources of black soot in Rivers State.

01 November 2018, Sweetcrude, Port Harcourt — Contaminated air arising from hydrocarbon exploitation and processing, such as gas flaring and soot, has been identified as parts of the contributors to increasing rate of kidney failures in the country.

Speaking, the Founder of Rekiff Kidney Support Foundation, Charles Awoyemi, said that the issue of gas flaring and black soot currently plaguing the state must be tackled to check the rising cases of the diseases.

Awoyemi, who himself is a survivor of kidney failure also identified other causes of the disease to include drug abuse, smoking and excessive drinking of alcohol.

While warning that people should be mindful of what they eat, he regretted that more Nigerians were dying of kidney failures and stressed the need for the construction of more kidney treatment centres across the country.

Earlier, Coordinator of Rekiff Kidney Support Foundation, Cyril Ekpe, explained that the health enlightenment seminar, which has been organised in several communities including secondary schools, was to enlighten the public on causes of kidney disease and how to avoid it.

Ekpe said that the mission of the Foundation was to identify with the victims of kidney failure and in the process provide them with the necessary knowledge and resources to overcome their predicaments.

He assured that the foundation will continue to enlighten people on the effects of kidney disease, adding that over 5,000 persons have benefited from activities of the foundation.