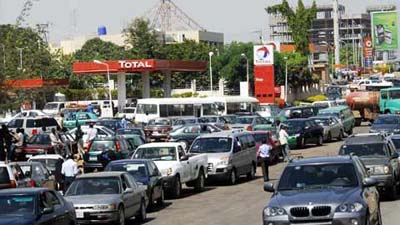 Oscarline Onwuemenyi, with agency reports
18 December 2017, Sweetcrude, Abuja – Following a deadlock in talks between representatives of the Petroleum and Natural Gas Senior Staff Association of Nigeria (PENGASSAN) and government officials over the weekend, the union has embarked on a nationwide strike from today (Monday), leading to many filling stations shutting down operations in major cities across the country.

It was observed that some filling stations the Federal Capital Territory, Abuja, and its environs, were shut on Sunday, while the few that sold petrol had very long queues that spilled onto the roads.

“As we speak right now, the NNPC is holding consultation with the association on this matter and we are optimistic,” he said.

Officials of PENGASSAN have disclosed that they were invited to a meeting with the Department of State Services (DSS).

On the meeting with the DSS, the Public Relations Officer, PENGASSAN, Mr. Fortune Obi, said it was as a result of the planned strike by the association.

He stated, “At the moment, nothing has changed but we will be having a meeting with the Department of State Services by 6pm today (Sunday). That is the latest development. However, we will still go ahead with our Central Working Committee meeting tomorrow (Monday).

“The meeting with the DSS should be basically on the strike issue and I think the management officials of Neconde are likely going to be at the meeting.”

Meanwhile, the Department of Petroleum Resources (DPR), in Anambra has warned members of the public against storing petroleum product in their homes to avoid possible fire outbreak.

Mr. Okechukwu Okoro, Controller of DPR in charge of Anambra, Ebonyi and Enugu states gave the warning in an interview with the News Agency of Nigeria (NAN), in Awka on Sunday.

Okoro said motorists and other customers to desist from panic buying but instead they should buy the quantity that would be enough for their use only.

He assured the people that DPR will ensure that appropriate pricing was enforced and that no marketer hoarded the product.

“There is enough fuel in the country, there is no need for panic buying or storing of fuel in private houses, the consequences of such practice can be deadly.

“The DPR is going out every day to ensure that there is full compliance to price and supply,” he said.
Okoro warned that no marketer should hold Nigerians hostage by increasing pump price illegally because it was yuletide, noting that the federal government has not announced any change in price.

He said there would be continuous clamp down on marketers that violate the regulation in the sector, adding that customers in the zone would be protected from the antics of such marketers.

“We are not aware of some of the excuses they give for increasing pump prices, because when we ask them to provide evidence, they are not able to do so.

“We will not relent in enforcing compliance, the challenge is that soon after we leave their filling stations, they return to their nefarious activities, the assurance we are giving is that customers in the zone shall be protected,” he said.