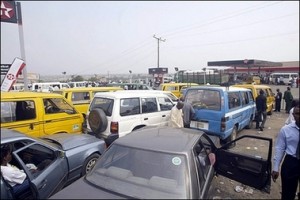 16 September 2012, Sweetcrude, LAGOS – THE fuel scarcity that rocked Abuja and some states across Nigeria in the past few weeks may have reached Lagos.

In many fuel stations in Lagos State, Saturday, long queues of vehicles were seen reportedly over fear that petrol would not be available in the next few days.
The imbroglio between marketers and the Federal Government over non-payment of petroleum subsidy to the former had sparked a strike that paralysed Abuja.

The marketers gave the government two weeks to resolve the verification claims on those that collected money without supplying the product.

They threatened to embark on a full scale strike if at the end the Federal Government fails to resolve the issue and pay them their outstanding.