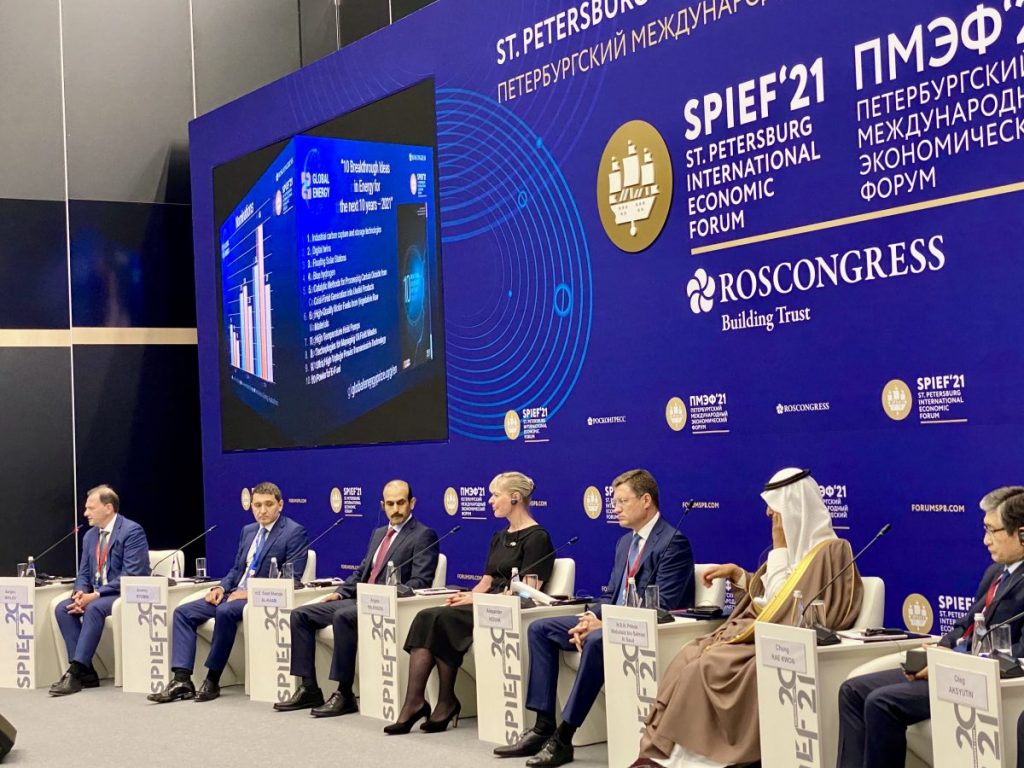 Doha, QATAR — The destiny of the world rests in innovative utilisation of hydrocarbons whilst embracing the rise of renewables in the global energy mix, Secretary General of the largest consortium of gas exporting nations, the Gas Exporting Countries Forum (GECF), said at the 24th St. Petersburg International Economic Forum (SPIEF).

“The world will need to power its economic growth through hydrocarbons, specifically the cleaner, abundant, and cheaper natural gas, for some time to come. It is obvious that the structure of the energy mix is becoming more diversified thanks to the expansion of renewables. However, fossil fuels are projected to remain dominant, accounting for 71% in 2050,” Yury Sentyurin disclosed, during a panel on “The Future of Energy: Energy transition” (3 June 2021).

“As an organisation dedicated to studying and forecasting the innovative use of natural gas, the GECF believes that it is gas that can realistically bring about the most efficient and environmentally friendly energy transition.”

These remarks were echoed by Alexander Novak, the Deputy Prime Minister and former Energy Minister of Russia, who reiterated his belief that traditional energy sources are not going away in the next few decades.

“Energy transition is coming, it’s happening, but its’ space will depend on a number of questions and a number of different issues. We must not discount conventional energy sources which are going to stay with us for a while yet,” he said.

“Russia will support the development of conventional energies and will attempt to diversity natural gas markets and others in future. Let’s join our efforts and act in concert to work on the climate agenda without neglecting the conventional energy sources.”

The importance of a just and fair energy transition which benefits all populations of the world was underscored by HE Angela Wilkinson, Secretary General and CEO of World Energy Council, who said her message is “energy for humanity”.

“We like to talk about technologies or resources or investments. But what we really need is an energy transition which is for people and planet …and as Novak has said it’s going to take a mix of all resources to do that,” she said.

“Innovation’s no longer about improving individual technologies, it’s about the integration of different technologies and their combination.”
These and similar themes form part of the UN Sustainable Development Goals too, for example, Goal #7 which aims to bring clean energy to all by 2030. Currently, close to a billion people around the world do not have access to electricity while over 780 million people in places such as Africa do not enjoy access to clean cooking fuel.

Nobel Laureate Chung Rae Kwon highlighted the ‘reductionist’ view of certain energy-transition proponents and reports which favour only one side of the picture.

“I appreciate the comment about the pace and the practical way of using conventional energy in an environmentally friendly way.”

The producers’ viewpoint was advanced by Abdulaziz bin Salman Al-Saud, the Minister of Energy of the Kingdom of Saudi Arabia, who said he is confident oil will be needed in the future to bring prosperity to all.

“I believe that our planet has always been in transition ever since god created it and will continue be in transition. It is the duty of human kind to make sure that we harness that transition, we master it, and we ensure that transition brings betterment to human lives regardless of what – and this is the trick – region they live in,” he said.

“The problem we have is there’s a type of condescending approach… Mitigating the issue of climate change, one needs to be inclusive. For that inclusiveness to happen people will need to be conscious of natural circumstances of all parties engaged.”

Resonating with his neighbour, HE Saad Sherida Al-Kaabi, Minister of State for Energy Affairs of Qatar and President and CEO of Qatar Petroleum called some recent reports on climate change very “dangerous”.

“There is this euphoria about the energy transition that everybody is getting excited, maybe overly excited, in discussing this issue. In some reports, I mean the International Energy Agency said that we shouldn’t invest in oil and gas. I think there is a very big danger that we are going into this kind of discussion where we understand that when we deprive the business from additional investments you have big spikes and you deprive nations,” he said.

“We all have the responsibility to produce in a more environmentally sensitive way. We are using the best emission technology that’s available, we are monitoring methane emissions, we have to do carbon sequestration and storage and take this as something front and centre. But we need to be careful lest we deprive investment in oil and gas sector; that’s going to really harm humanity and the more than a billion people that actually don’t have electricity today.”

According to the latest GECF estimates available in the organisation’s flagship publication of the GECF Global Gas Outlook 2050, natural gas will become the leading source of energy in the global primary mix by mid-century, increasing its share from 23% today to 28%.

The session was moderated by Sergey Brilev, President of Global Energy Association and renowned journalist, who incidentally delivered a keynote at the GECF Gas Lecture series in April 2021 under the title of ‘Global Energy: Supporting Science and Innovation’.