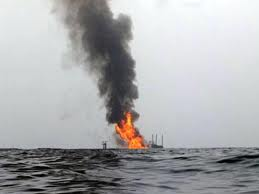 27 February 2012, Sweetcrude, Abuja – President Goodluck Jonathan on Monday said the Federal government was committed to mitigating the impact of the gas blow-out on communities around the K.S Endeavour (Panama) rig gas well-head belonging to Chevron Nigeria Plc which occurred in January 16, 2012.

Jonathan, who was speaking when he paid a visit to the Koluama clan in Southern Ijaw Local Government of Bayelsa State, noted that relief materials including food, water and medical relief be brought to the impacted communities, even as the oil company and its partners work had to put out the fire at the rig.

The President was accompanied on the visit by the newly elected Bayelsa State governor, Mr. Henry Seriaki Dickson, and the Ministers of Petroleum Resources, Environment and Niger Delta Affairs, including the Group Managing Director of the Nigeria National Petroleum Corporation, NNPC, and the Director-General of the National Emergency Management Agency, NEMA, among other top government officials.

He said NEMA should “commence immediate relief efforts to ensure that the affected communities have what they need to get through the difficult times brought about as a result of the impact of the explosion on their means of livelihood.”

Responding to issues raised by the communities, President Jonathan promised “vigorous efforts by government to alleviate the sufferings of the people of the area” by promoting training and skill acquisition as well as encouraging employment of local people in the oil and gas industry through the local content programme.”

Delivering remarks at the meeting, the Governor of Bayelsa state, Seriaki Dickson, noted that the pain of the environmental degradation was “all too familiar to the people of the Niger Delta,” adding that it was part of the sacrifice the people make to produce the energy that sustains the national economy.

According to him, “This sort of thing (explosion) has happened over time in this area, and the people in these parts have grown used to this kind of living. Our job as a government is to ensure that companies behind such acts are compelled to do the right thing, even as we work to ameliorate the negative effects of such incidences.”

Dickson further announced that his government has formed two committees to ascertain the legal and physical parameters of the damage done by the well-head blow-out.

He also warned against what he called “environmental terrorism” undertaken by youths in the area through illegal bunkering and refining, adding that such activities were worse than the impacts of oil leakages on the environment.

On his own part, the GMD of the NNPC, Engr. Austen Oniwon, explained that the corporation, which is in joint venture partnership with Chevron, was working hard to ensure comprehensive containment of the fire from the blow-out.

Oniwon noted that, “What happened here was unfortunate; we have been working with the communities over the weeks to contain the situation, and we are glad that the Mr. President is here today to see the impact first hand and to empathize with the people of Koluama. We are sure that positive things will happen after this visit by the President.

“We remain committed to working with the communities involved to ensure that things are brought back to normal, and we will continue to remain good corporate citizens by providing support for the development of the region,” he added.

Meanwhile, some elders and youth leaders who spoke to our correspondent demand that the Federal Government and Chevron Nigeria Plc should immediately begin to make arrangements for the evacuation of inhabitants of the community due to the hazards of the gas blow-out on the environmental which has affected their means of livelihood.

“Chevron and the Federal government should without delay send experts to the site and impacted communities to assess the extent of damage caused by the explosion to ascertain he true impact of the pollutants on human, wild and aquatic lives as we can no longer eat fish caught from the ocean, rivers and creeks,” they stated in a joint statement.