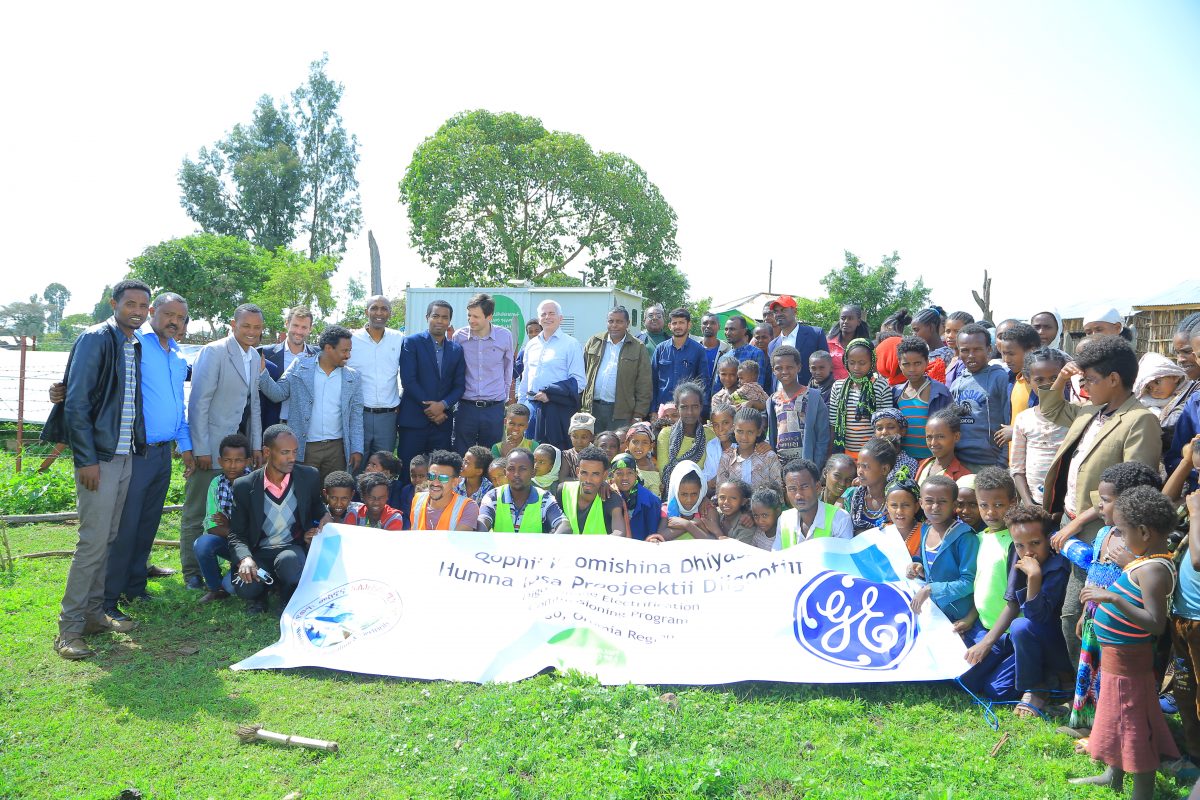 The system which was implemented in partnership with Ethiopia’s Ministry of Water, Irrigation and Electricity, the Oromia Region Energy bureau as well as Ethiopian Electric Utility (EEU) will provide reliable, cost-effective power to 1,500 inhabitants of Digo providing critical power to a health clinic, school, administrative offices, and homes.

The commissioning is consistent with Ethiopia’s National Electrification Program – Implementation Road Map (NEP-IRM) which seeks for a coordinated off-grid implementation program plan, designed for accelerated scale-up of mini-grid solutions in rural and deep rural areas. According to Dr. Eng. Sileshi Bekele, Ethiopia’s Minister of Water, Irrigation, and Electricity, “Electricity access is an essential pillar of economic and social development. Localized solutions such as the Hybrid Distributed Power unit provided by GE will be part of the solution to electrify Ethiopia going forward”.

GE’s Hybrid Distributed Power combines PV solar panels, batteries, and a diesel generator to provide reliable, cost-effective power to a mini-grid system. GE’s Predix platform, designed for digital Industrial Internet of Things (IIoT), maximizes the use of clean solar power and batteries for the unit while a variable speed diesel generator provides essential backup when battery power is insufficient. The entire system is containerized inside a standard shipping container that can be efficiently and speedily installed. GE partnered with a local entity, http://SolarTechPlc.com, in the installation and commissioning of the system.

The Digo village Hybrid power system is GEs third installation in Ethiopia. In 2017, GE funded two similar units at Health Centers in Guba and Ashoka in Southern Nations, Nationalities, and Peoples’ Region (SNNPR) region. “Electrification of Digo is a continuation of the impactful contribution that GE Is making in Ethiopia while playing a central role in the implementation of Growth and Transformation Plan (GTP) priority projects,” said Daniel Hailu, Chief Executive Officer of GE in Ethiopia.

The Hybrid Distributed Power unit was funded by GE Renewable Energy’s “We Share the Power” program which brings power to remote, off-grid areas of the world through efficiency savings at GE Renewable Energy’s manufacturing sites around the world. The project was also supported by GE Licensing, which works with partners around the world to bring GE’s containerized hybrid power island to remote areas of the world requiring off-grid distributed power solutions to meet their energy needs.

GE businesses have been active in the Ethiopia market for over 20 years. The project execution in Ethiopia was led by the GE Hydro team in charge of the Grand Ethiopian Renaissance Dam Project, where GE supplies 5 units of 400MW. An integrated GE Ethiopia office was inaugurated in 2017 as a commitment towards long-term partnership in Ethiopia. The company continues to be a key partner for Africa with over 2600 employees in 33 countries. GE recently achieved its 100th power plant (https://goo.gl/HjYE34) milestone in Sub-Saharan Africa across renewables, gas and steam plants generating over 46GW of power.