Doha, Qatar – Upon the GECF invitation HE Francesco La Camera, Director-General of the International Renewable Agency (IRENA) performed at the 46th edition of the signature Monthly Gas Lecture Series under the title “The Energy Transformation: the Way Forward”.

The event focused on continuous energy transition acceleration, as well as necessitated the role of investments in frontrunning technologies as a long-term response to the crisis caused by Covid-19 pandemic outbreak. 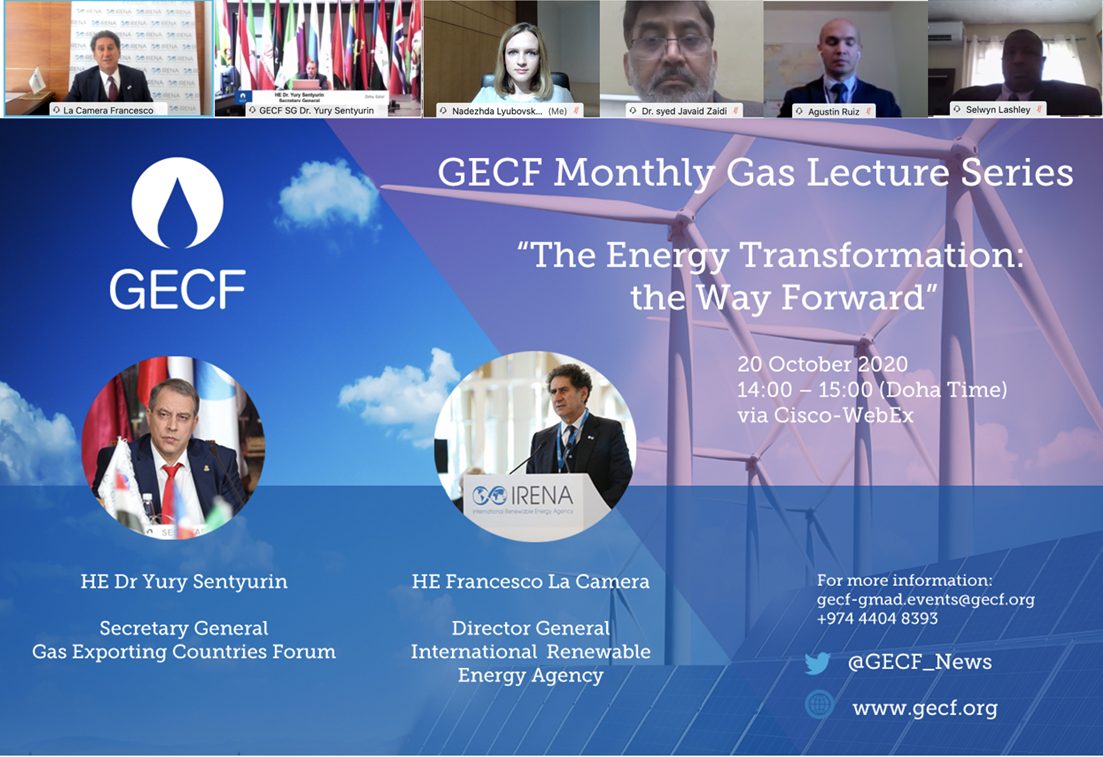 Inaugurating the lecture, HE Yury Sentyurin, GECF Secretary General stressed that the two entities have been enjoying long-standing collaboration for years. “This is a natural relationship, one that we have started and one that we plan to continue cementing in times ahead” – he stated. Many of the initiatives of IRENA – ‘SIDS Lighthouses Initiative’ (Small Island Developing States), ‘Coalition for Action’, ‘REmap’ and ‘Clean Energy Corridors’ – the GECF has a lot to contribute to the success of them.

Setting the scene for the keynote speech by the esteemed lecturer, GECF Secretary General outlined: “Sustainable development is no longer a buzzword, nor a ‘greenwash’ – it is a profound reality of our time. The changes in climate that sustainable development seeks to reverse reveals itself in the form of raging forest fires, rising sea levels, unusual weather patterns, and consequently mass migration”.

In the spirit of IRENA‘s mandate as leading intergovernmental agency for the energy transformation, HE Francesco La Camera updated the audience on the main findings of the IRENA Global Renewables Outlook, the most recent deliverables and researches, providing a technically feasible and economically viable energy transition pathway in line with global climate objectives by 2050. The lecturer underlined specifically, that incremental cost-competitiveness of renewable energy and supportive governmental energy policies had proven to be the key drivers for continuous and consistent energy transition.

The important role and significant potential of the natural gas industry in advancing energy systems and attaining the UN’s Sustainable Development Goals along with the Paris Agreement ambitions was in the centre of the lecture. As per the GECF projections, natural gas will be the fastest-growing fossil fuel in the global energy mix, increasing its share from currently 23% to 28% by 2050. These estimates are inter alia due to the inherent environmentally friendly features of the source.

In that sense, hydrogen is assuming vital significance against the backdrop of energy industry setting its sights firmly on green growth. “We can witness significant interest by a growing number of countries – Australia, Brunei, China, Germany, France, Japan, Morocco, The Netherlands, Norway, the Republic of Korea, UK and the EU – in accelerating hydrogen projects. And the existing gas infrastructure in combination with renewable-based hydrogen, and, in a transitional period, natural gas combined with Carbon Capture and Storage (CCS) technologies for producing blue hydrogen, could play a key role in hydrogen incremental production and distribution by 2050” – the Agency speaker highlighted.

The Covid-19 pandemic impact on energy transformation processes was among the topics raised during the lecture. IRENA Director-General zoomed on necessary and timely investments into the disruptive technologies and infrastructure to push forward the energy transition despite obstacles, caused by the novel disease outbreak. This idea was supported by Dr. Sentyurin, who mentioned that “these immediate challenges will not let GECF Member Countries shirk from their duty to bring about economic and personal prosperity for every individual in the world, while upholding the values of sustainable development”.

Wrapping up the discussion on the sides linked to the recent G20 Energy Ministerial Meeting Communiqué, which called on all stakeholders – including the both GECF and IRENA – to “further strengthen cooperation, collaboration, and partnerships”. Secretary General and Director-General agreed to further enhance the ongoing dialogue at the leadership and expert level in the areas of mutual alignment to write the next chapter of growth for the greatest process of a period of change underway – the energy transition.