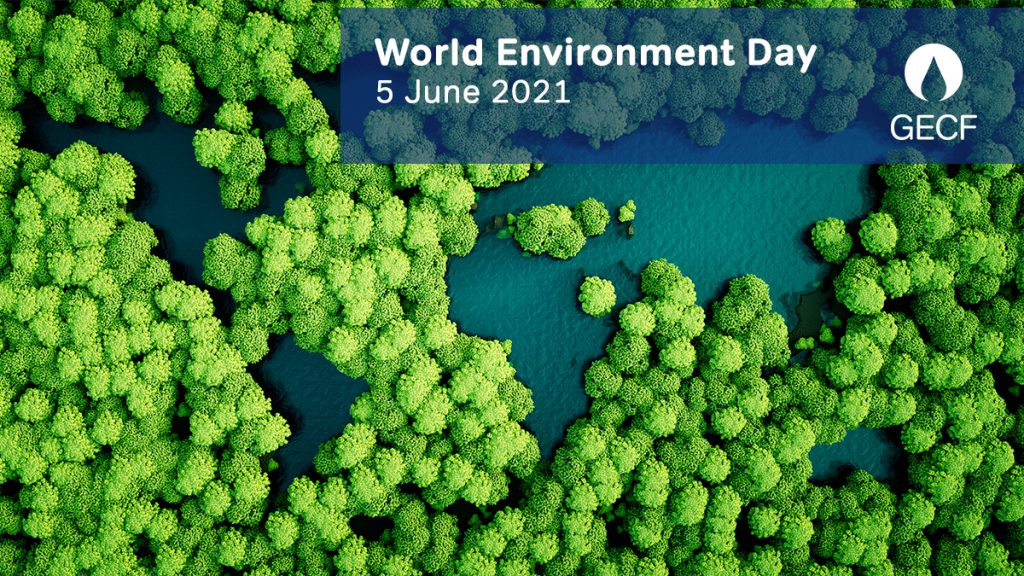 Doha, QATAR –- Acknowledging the responsibility of the industry to protect the Earth, the Gas Exporting Countries Forum (GECF), the association of the world’s leading gas producing nations, is highlighting a number of environmentally-sound steps its Member Countries have taken on the occasion of the World Environment Day.

World Environment Day is celebrated every year on 5 June and provides an opportunity to raise global awareness on positive environmental action to protect nature and the planet. This year’s World Environment Day is witnessing the launch of the UN Decade on Ecosystem Restoration (2021-2030), a global movement to prevent, halt and reverse the degradation of ecosystems.

Natural gas, as the cleanest among all available hydrocarbons, has assumed a renewed importance in light of efforts to stimulate economic recovery and embrace net zero goals.

“The GECF believes that natural gas, as an abundant, affordable and clean hydrocarbon source, has a central role to play in the energy transition while simultaneously supporting progress on several sustainable development dimensions including the guardianship of ecosystems, human health, and the economy,” said Yury Sentyurin, Secretary General of the GECF.

“These ideals are enshrined in the GECF Summit Declarations, adopted on the level of Heads of State and Government, the Organisation’s Long-Term Strategy, and environmental, social and corporate governance practices, and applied by the Member Countries. In the development of these strategic documents, the focus on environmentally sound business materialises through our participation in the G20 Ministerial Meeting on Energy Transition and Global Environment for Sustainable Growth, via close alignment with UNESCO and its Natural Sciences division in particular, as well as via active involvement in the UN Framework Convention on Climate Change with direct participation in the Conferences of Parties where our Forum enjoys an observer status since 2018.”

“Currently, we are working with the Italian governmental bodies, which are partnering with COP26 host, the UK, to present a unified voice through their respective G20 and COP26 presidencies.”

The GECF Member Countries are demonstrating their manifold commitment to environmental stewardship by reducing emissions from their own operations and wherever they hold equity to accelerate decarbonisation.

Russia, one of the biggest energy producers of the world, has recently ratified the Paris Agreement, adopted energy strategies at the governmental level, and initiated an array of environment-centred initiatives to advance its fuel and energy sector. “Let’s join our efforts and act in concert to work on the climate agenda without neglecting the conventional energy sources,” said HE Alexander Novak, Deputy Prime Minister and former Energy Minister of Russia recently, while reiterating his belief that traditional energy sources are not going away in the next few decades.

“Energy transition is coming, it’s happening, but its’ space will depend on a number of questions and a number of different issues. We must not discount conventional energy sources which are going to stay with us for a while yet,” he added. It should be noted that Russia is orienting its vast gas industry towards producing the ‘blue hydrogen’ and plans to export as much as 33 million tonnes per annum (mtpa) of this carbon-neutral fuel by 2050.

The Forum derives inspiration from Norway, western Europe’s biggest oil producer, on environmental leadership in the energy industries. Currently, an impressive 98% of Norway’s electricity production comes from renewable energy sources, where hydropower meets the major part of it. Through its national energy company Equinor, the Kingdom is part of the consortium building Europe’s biggest hydrogen project, slated to be completed by 2024.

Qatar, the biggest exporter of LNG in the world, is reducing emissions from the use of its products in the transport segment and investing in environmentally-friendly fuels, which can be blended with existing fuels such as jet and diesel to reduce greenhouse gas (GHG) emissions from transportation and aviation. In Egypt, a Presidential Decree last year made it mandatory for all new cars to run on natural gas.

At the St. Petersburg International Economic Forum earlier in the first week of June, HE Saad Sherida Al-Kaabi, Minister of State for Energy Affairs of Qatar and President and CEO of Qatar Petroleum highlighted that Qatar “is using the best emission technology that’s available, monitoring methane emissions, doing carbon sequestration and storage and take this as something front and centre”.

In this context HE the Minister of State emphasised that “there is this euphoria about the energy transition that everybody is getting excited, maybe overly excited, in discussing this issue. In some reports, I mean the International Energy Agency said that we shouldn’t invest in oil and gas. I think there is a very big danger that we are going into this kind of discussion where we understand that when we deprive the business from additional investments you have big spikes and you deprive nations”.

“We all have the responsibility to produce in a more environmentally sensitive way. But we need to be careful lest we deprive investment in oil and gas sector; that’s going to really harm humanity and the more than a billion people that actually don’t have electricity today.”

Gas is seen as cleaner than coal and oil due to its lower emission rates when processed. It is also available in abundance and is flexible to transport to all corners of the world. Its use in power-generation, where it will likely replace coal and nuclear power plants, electrification, maritime and road transport, and other sectors projects it to become the fastest growing source of energy in the world by 2050, 23% from today to 28%.

To unlock the potential of natural gas further, the GECF has established the Gas Research Institute, which works to develop technical knowledge and innovative technologies that reduce GHG emissions.

“The Forum has launched an Environmental Knowledge and Solutions initiative with an aim to share best-practices, acquire new knowledge, and bring pioneering solutions to meet the environmental challenges of today and tomorrow,” noted HE Sentyurin.

The EKS supports the Paris Agreement process and the attainment of UN Sustainable Development Goals, in particular, Goal #7 of Affordable and Clean Energy.

Inside the GECF’s Secretariat in Doha, Qatar, staff is encouraged to recycle and reuse material where possible. In 2019, it signed an MoU with Qatar-based Elite Paper Recycling to support environmental protection and forests preservation.