Singapore — Oil refiners are ramping up output to meet a synchronised uptick in demand across Asia, Europe and the United States, but plant maintenance and high natural gas prices will constrain supply in the fourth quarter, company officials and analysts said.

This comes as profits for producing ground transportation fuels such as diesel and gasoline have rebounded globally for the first time since the start of the pandemic, as countries gradually emerge from COVID-19 movement restrictions here.

A coal here and natural gas crunch here across Europe and Asia, which has forced some power generators to burn kerosene, diesel or fuel oil and stock up ahead of the peak winter heating demand, is also supporting global oil prices here.

Global crude and key refined product prices have risen more than 60% in 2021 to multi-year highs.

“Refining margins have finally found some ground,” said Sri Paravaikkarasu, director of Asia oil at energy consultancy FGE, as she forecast a “big increase” in crude runs this winter.

The increase will be “led by India, followed by South Korea, while Taiwan and Japan will increase runs as well, as refiners try to take advantage of the current high margins”, she added.

For a graphic on Global crude oil and fuel prices press higher on recovering consumption: 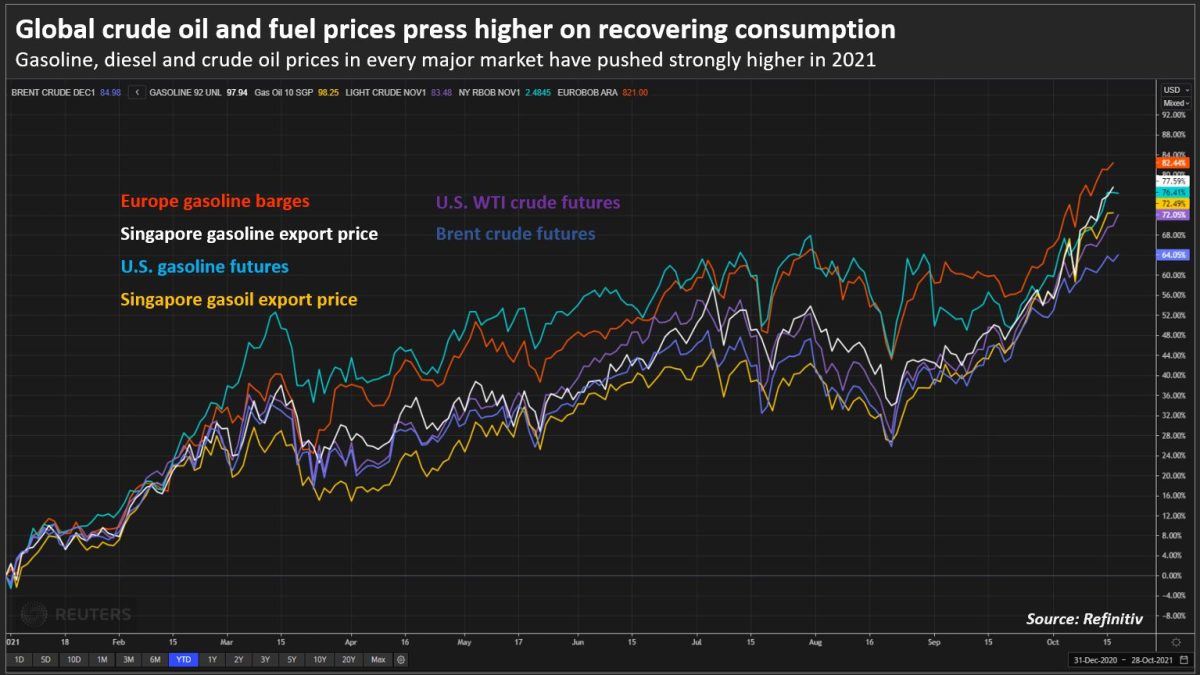 Asia’s crude runs are expected to reach 29.5 million barrels per day (bpd) in the fourth quarter, versus 29.1 million bpd a year ago and 30.3 million bpd over October-December in 2019, Paravaikkarasu said.

“The increase in output won’t happen so quickly as we have maintenance at a unit in October,” he noted.

In South Korea, a major refiner plans to boost output in the fourth quarter by about 5% versus the third quarter, a source familiar with the matter said, declining to name the company.

The margins had turned negative last year, plumbing a record low in May, as the pandemic eroded demand.

In Northwest Europe, refining margins topped $9 last week, the highest since April 2020, while U.S. Gulf Coast refining margins are currently around $14, up nearly three-fold from the same period a year ago, Refinitiv Eikon data shows. 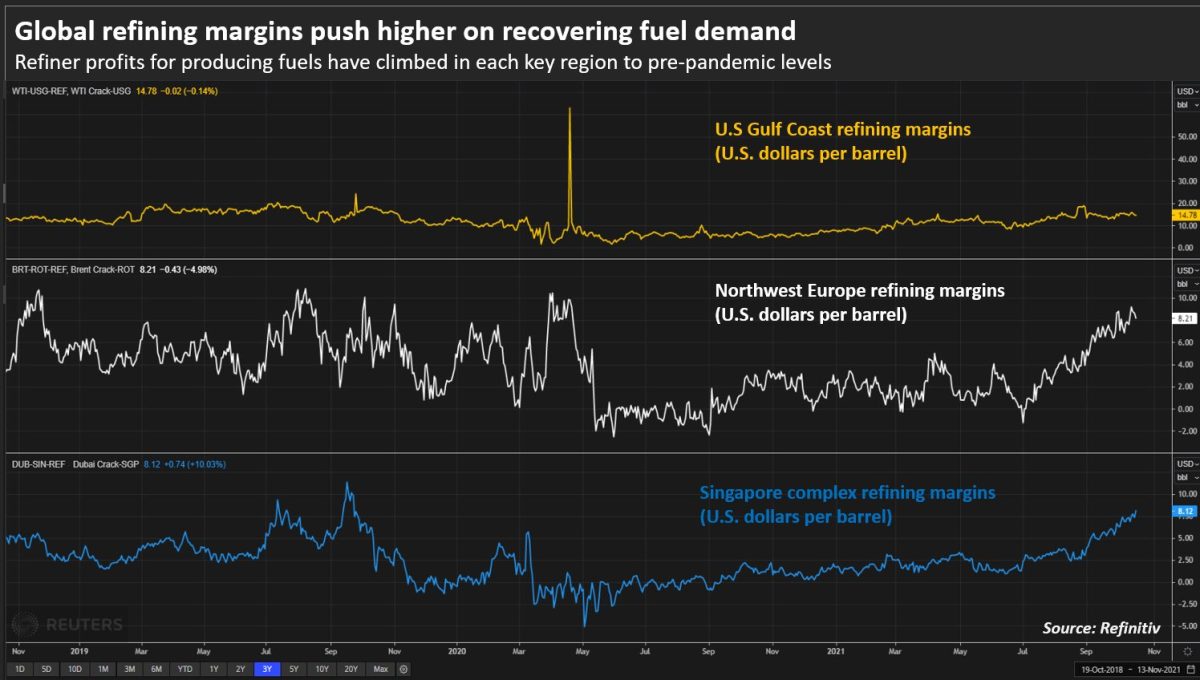 The spike in margins comes against the backdrop of a steady drop in inventories across key markets.

Combined oil product inventories from the United States, northwest Europe, Fujairah, Singapore and Japan fell to their lowest since 2014 as of Oct. 14, according to FGE.

Hurricane Ida disrupted operations in the world’s top refiner, the United States, in the past two months, while No. 2 refiner China has curbed exports as part of reforms.

“It’s increasingly likely that the government will not hand out additional product export quotas, which adds more downside risk to Chinese runs for the rest of the year,” Energy Aspects analyst Liu Yuntao said.

Even so, China’s crude throughput is still seen up from 14.63 million bpd in the third quarter.

The International Energy Agency sees global crude throughput at 79.6 million bpd in fourth quarter, up from 77.9 million bpd in the third quarter, led by the United States and Asia.

However, like refinery maintenance, high natural gas prices too are expected to slow the ramp up in runs, executives said.

In Europe, record natural gas prices are forcing refiners to adjust operations to limit their exposure to costly inputs, such as hydrogen which requires natural gas as a feedstock and is used by refiners to remove sulphur from oil products.

“We are impacted by the current high energy prices just like any other consumer of natural gas and electric power,” a spokeswoman for refiner Varo Energy said.

“To ensure we can continue to supply our customers, we have adjusted our operations to minimize our natural gas consumption whilst preserving our ability to supply products.”

In the United States, crude runs are expected to drop for a second straight month in October to 15 million bpd, as the sector starts autumn maintenance, Energy Aspects said in a note.

“However, with refinery margins up by nearly $9 y/y and product stocks at the low end of their normal range, refinery runs could surprise to the upside during October,” it added.