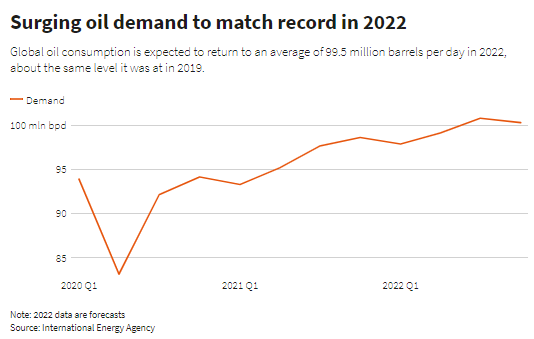 New York — Global oil demand roared back in 2021 as the world began to recover from the coronavirus pandemic, and overall world consumption potentially could hit a new record in 2022 – despite efforts to bring down fossil fuel consumption to mitigate climate change.

Gasoline and diesel use surged this year as consumers resumed travel and business activity picked up. For 2022, crude consumption is expected to reach 99.53 million barrels per day (bpd), up from 96.2 million bpd this year, according to the International Energy Agency. That would be a hair short of 2019’s daily consumption of 99.55 million barrels.

That will put pressure on both OPEC and the U.S. shale industry to meet demand – after a year when major producers were surprised by the rebound in activity that overwhelmed supply and led to tight inventories worldwide. Numerous OPEC nations have struggled to add to output, while the U.S. shale industry has to deal with investor demands to hold the line on spending.

After beginning the year at $52 a barrel, Brent crude rose as high as about $86 per barrel before tailing off at the end of the year. Forecasters say prices could resume their upward path in 2022 unless supply increases by more than expected. Bank of America researchers estimate Brent will average $85 a barrel in 2022, due to low inventories and a lack of spare capacity.

The unknown is the Omicron coronavirus variant, as numerous countries have reimposed travel curbs which will hurt the aviation industry and consumption.

“If this is another wave like the ones we’ve seen before then it is a negative hit to economic growth in the first quarter of 2022,” said Damien Courvalin, head of energy research at Goldman Sachs. “But if there is a subsequent recovery, oil demand, which briefly touched pre-COVID levels in early November, would then be at new record highs for most of 2022.”

The 2021 rebound took suppliers by surprise, raising tensions between large producing countries and the world’s biggest consumers like the United States, China and India. With gasoline prices up sharply earlier this year, U.S. President Joe Biden called for the Organization of the Petroleum Exporting Countries and its allies, known as OPEC+, to boost overall output after restraining supply for months.

However, OPEC nations have struggled to raise output due to underinvestment, as Reuters data showed the group was over-complying with its production targets in November.

The U.S. shale industry, similarly, has not responded to higher prices as they had done previously, bowing to investor pressure to restrain spending. Overall U.S. production averaged 11.2 million bpd in 2021, compared with a record of nearly 13 million bpd in late 2019, according to the U.S. Energy Information Administration.

Global oil consumption is expected to return to an average of 99.5 million barrels per day in 2022, about the same level it was at in 2019.

Global oil consumption is expected to return to an average of 99.5 million barrels per day in 2022, about the same level it was at in 2019.

OMICRON’S UNCERTAINTY
Coronavirus cases are surging due to the highly contagious Omicron variant, and further outbreaks could slow the recovery in major economies. IEA and others have lowered expectations slightly, with the IEA cutting its forecasts for 2021 and 2022 by 100,000 bpd on average to account for lower air travel.

“Even 5% of the population unvaccinated can create a crisis,” Fereidun Fesharaki, chairman of consultancy FGE, said. “The idea that you can have 70, 80 or 90% vaccinated and be OK is being challenged.”

However, there is little evidence yet that Omicron has had a dramatic effect on demand. Fuel inventories at the Amsterdam-Rotterdam-Antwerp (ARA) hub, a key European oil and gas shipping locale, fell in the most recent week – a signal of steady consumption. Fuel prices are the highest on record in Britain, data from automotive services firm RAC unit Fuel Watch showed.

In Asia, refinery profit margins to produce gasoline have cooled in recent weeks amid Omicron-led demand concerns, but the general expectation for 2022 is for further recovery, with higher profits for distillates like diesel.

Emerging markets in Asia like Indonesia and Thailand are expected to recover more strongly in 2022, said Peter Lee, senior oil and gas analyst at Fitch Solutions.

Gasoline demand is expected to grow by 350,000 barrels per day in 2022 in Asia, according to Richard Gorry, managing director at JBC Energy Asia.

“The majority of this demand growth will come from India, followed by China,” he said. “But we would even see demand in Japan growing by 30,000 bpd as COVID restrictions gradually unwind.”