Globalscan raises alarm over under utilised scanners at Seme 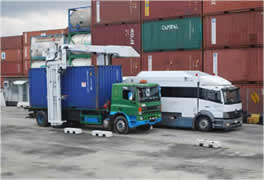 30 May 2013, Sweetcrude, Lagos – INDIGENOUS destination inspection service provider, Globalscansystem Limited has raised alarm over the low usage of its equipment at the Seme border post despite its sophistication and efficiency.

Speaking to journalists during a facility tour of the equipment at the Seme border, Globalscan Chief Executive, Mr. Fred Udechukwu said that the two sophisticated scanners which cost a whooping sum of 12.5 million euro, are effective even as he stressed that under utilisation of the scanner has become a problem.

Udechukwu said the equipment is also available for scanning anytime of the working periods and that the scanners have the capacity to scan on a 24 hour basis.

The Globalscan boss affirmed that the mobile scanner can assess a minimum of 160 trucks par day, which according to him can scan 20 trucks under an hour.

Udechukwu reiterated that the mobile facility at the border post takes 3 minutes to assess a truck adding that three shifts which the company operates can results to 480 trucks scanned in a day.

He noted that while Globalscan has the capacity to scan 480 trucks, same number of trucks are not available for scanning, and that it is what the Nigerian Customs Service releases to them that they inspect.

He said that the company engaged 160 Nigerian personnel, and that indirect staff summed up to be 200.

The scanning expert said that the company operates a site in Warri, Calabar, PTML, three sheds at Muritala Muhammed Airport and another at the border post.

Udechukwu reiterated that “for a truck to be scanned it must meet three conditions some of which include; it must be released by the Customs for scanning, it must have the necessary document which includes the RAR and others before scanning can take place and the truck must meet the specified measurement”

The scanning firm boss also lamented that the size of trucks operating at the border post are a bit bigger compared to others that operates in the Lagos and Tin Can Island ports.

He disclosed that as a result of certain elements in the Smiths Heimann scanning equipment, it must be powered for it not to develop technical hitches but the turn out of trucks are relatively low.

“We don’t have the power to enforce trucks to come for scanning, it is whatever the Customs have worked upon and their single goods delcaration (SGD)forms sent to us scanning , they send the document to us and since the beginning of this month we have never has any bad time and all the trucks that are meant for scanning are scanned,” the General Manager Site Operations, Hassan Adeogun noted while speaking.

He also noted that recently some trucks were released without undergoing scanning process, adding that the scanners are not faulty for operation.

“What we are scanning mainly here are Ecowas Trade Liberalisation Scheme, ETLS, goods and those are the goods they send to us for scanning. But when we scan general goods, they say no to that because of its heterogeneous nature”

He added that expatriates are sent to the site on a quarterly basis for purpose of maintaining the equipment in addition to the regular servicing at weekends.

According to him, the scanners have not experienced any fault since 2006 and that there is a contract agreement with Smiths Heimann on maintenance services.

Speaking on behalf of the freight forwarders present during the tour, former chairman, Council for the Regulation of Freight Forwarding, CRFFN, Tony Nwabuinikwe commended the company for putting in place state of the art scanners.

The former CRFFN boss noted that if deployed properly, clearing of consignment will be easier as a result of the equipment.

He urged the federal government to encourage the indigenous service provider like Globalscan because of the facility in place.

The pioneer chairman of CRFFN added that the scanners at Seme border post also be deployed at other ports in the country because of its advanced nature.