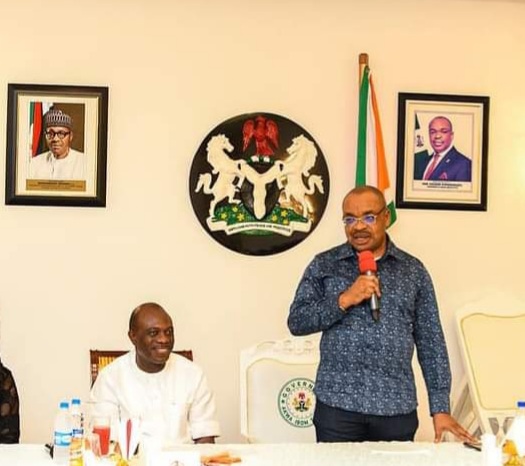 Port Harcourt — Akwa Ibom State Governor, Udom Emmanuel, has appealed to the Nigerian National Petroleum Corporation NNPC, to relocate the headquarters of some of its subsidiaries to occupy the 21-storey smart office accommodation at the Dakkada Towers in the State.

The governor who decried that the state despite having the largest crude oil and gas reserve in the country, does not have any oil and gas presence, called for the decentralization of NNPC operations from Abuja.

Udom said these while hosting the management of NNPC Upstream, led by the Group Executive Director, Adokiye Tombomieye, who are in the state for a 3-day retreat on the restructuring of NNPC from its Corporation status to a Limited Liability Company.

“So we are appealing to NNPC to relocate the headquarters of some of its subsidiaries to occupy the smart office accommodation at the Dakkada Towers. Four floors are there for the entire group, NUPRC, NAPIMS, NNPC.”

The governor also applauded NNPC Upstream for choosing his State as venue for the retreat, applauded their initiative towards making the Corporation a Limited Liability Company, urging them to brace up for the task ahead of the new responsibilities.

He commended NNPC for their transparency in publishing financial reports of the Corporation, which he said has been unprecedented in recent times, urging them not to relent in their commitment to bridge existing gaps thereby restoring the confidence of the people.

“Congratulations for the restructuring of NNPC, the boldness to do this will give you opportunities.

“Some of you that are group heads have written your names in plaque because once you restructure and put the structure, strategy, the system there will enable that structure to run, history will never forget any of you, but unfortunately, something about restructuring, if you get it wrong history will crucify you.

“So it is something that no matter how you are pushed by government or politicians you have to get focused on it as a professional because of responsibilities and the expectations from the people.

“This is the first badge of management in NNPC that we have seen a financial report and it’s to your credit and it is timely too. I think the first audit of NNPC is done by your regime. So if you began a good work, take it to the end.”

Earlier, the Group Executive Director, NNPC Upstream, Adokiye Tombomieye, disclosed that NNPC was transiting from a Corporation into a Limited Liability Company, as one of the steps of restructuring the corporation for efficient and effective service to Nigerians.

Tombomieye, said the essence of holding a retreat in the state was to review the performance of the Corporation in the last three quarters, adding that the exercise has been successful.

“The Upstream Directorate have come to review our performance in the last three quarters to see the level of performance and how to serve the nation better.’’