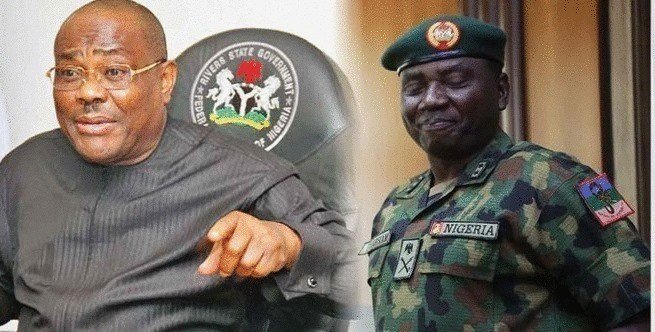 Port Harcourt — Rivers State Governor, Nyesom Ezenwo Wike has accused the General Officer Commanding, GOC, of the 6 Division of the Nigerian Army, Maj. Gen.l Jamil Sarhem, of running an illegal oil bunkering squad for the purpose of financing his quest to be appointed the Chief of Army Staff.

Governor Wike declared that any attempt to appoint the GOC of the 6 Division of the Nigerian Army as the Chief of Army Staff, would spell doom for the nation’s failing security architecture.

The governor speaking during a courtesy visit by the Commander of Joint Task Force, Operation Delta Safe, Real Admiral Akinjide Akinrinade at the Government House, Port Harcourt, also accused the GOC of the 6 Division of compromising security in Rivers State through illegal actions.

According to him, “The GOC is doing illegal bunkering, which he is using to finance his quest to emerge as the country’s Chief of Army Staff. He has his own team that is making money for him through oil bunkering.

“We will have a security meeting and he will release the details to criminals. And the Chief of Army Staff will leave the man here because he is playing their role.

“How will the security of the state be with such a man as the GOC? He will compromise when fighting to reduce crime, they sent us a GOC who destroy the security architecture of the state,” Wike alleged.

Governor Wike wondered what the Joint Task Force Operation Delta Safe would do when they encounter the illegal oil bunkering team of the GOC.

He assured the Commander of Joint Task Force Operation Delta Safe that the Rivers State Government will support their operations to ensure that they defend the Niger Delta, especially Rivers State.

“Anybody who wants to help us fight crime, I will support. I will never support those involved in illegal refineries”.

Akinrinade said that the Joint Task Force, Operation Delta Safe has recorded successes in the protection of oil and gas facilities and the maintenance of internal security in the area.

He assured the governor that the JTF will not relent in fighting crime in the State while appealing to leaders in the state to engage youths to shun crime and criminality for the development of the state.

“Governor Wike is a consummate politician and grassroots leader. As a man who understands National Security, he understands that National security itself is Local.

“We want to seriously commend you on the numerous achievements you’ve made since your tenure. I will like to take this opportunity to congratulate the Governor on the renewal of your mandate to serve the people of Rivers State for another four years,” he said.