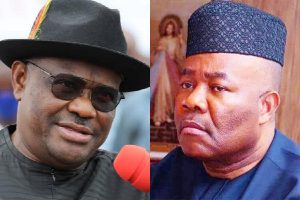 Port Harcourt — Rivers State Governor, Nyesom Ezenwo Wike, and the Minister of Niger Delta Affairs, Sen. Godswill Akpabio, have tackled each other over the alleged mismanagement of the 13 percent oil derivative funds allocated to Niger Delta states  by state governors.
Sen. Akpabio had called out state governors in the region, accusing them of financial recklessness and mismanaging their 13 percent allocation after the nine governors had failed to attend the commissioning of the permanent headquarters of the Niger Delta Development Commission, NDDC, except for Imo State Governor, Hope Uzodinma.
Reacting to the minister, Governor Wike said it was disingenuous for Akpabio, who as former governor of Akwa Ibom State acted like a demi-god, to accuse incumbent governors of financial recklessness just because they did not attend the inauguration of NDDC headquarters building in Port Harcourt.
Governor Wike accused the minister of sponsoring militants to cast aspersion on Niger Delta state governors by demanding that they should account for N55 billion oil derivative, they have received from 2018 till date.
The governor wondered how the minister came about the said figure.
“You (Akpabio) went and started sponsoring so called militants that we should render account of N55 billion. Where did we get the N55 billion? If we got N55 billion, then he got N200 trillion. You cannot insult people.
“We knew when Akpabio was governor, what he was doing. In fact, he saw himself as god then. Now, he has the temerity to insult South South governors. We will meet one day. If he did well, why did he fail Senate election. If his people love him, why did he fail Senate election. Ordinary Senate? And you will come and talk to us,” he said.
He explained that the inauguration of the NDDC headquarters building was planned without resort to the governors in the region to know if the date was suitable for them.
The governor also said Senator Akpabio lacked the morality to ask what the governors have done with the 13 percent funds, when he got more money as a governor because Nigeria’s economy was better then.
The governor said the reason the minister defected to the All Progressives Congress was because he was afraid that the government might unleash the Economic and Financial Crimes Commission after him.
“That is why Nigeria cannot move forward. Everybody is running away, because when they send EFCC, you run to the other party, then they protect you. That is the party , that is government that is fighting corruption. Akpabio is now moving around, happy. He no longer takes his blood pressure medicine,” the governor said.