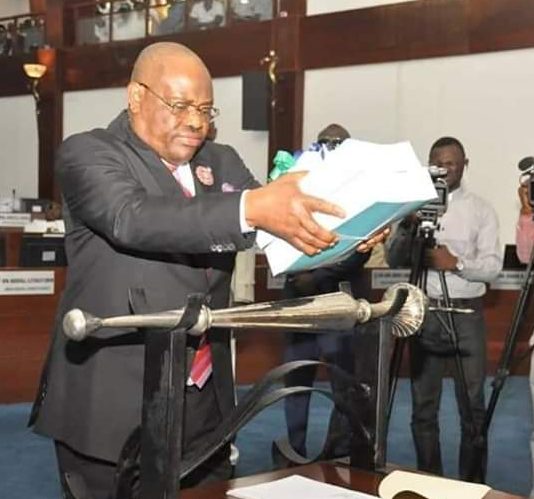 *Gov Wike presenting the 2019 budget proposal at the State House of Assembly.

Presenting the 2019 Appropriation Bill, Governor Wike said the strategic thrust for the 2019 budget is to promote economic growth and diversification, create jobs and reduce unemployment; take as many Rivers people out of poverty and improve the standard of living of Rivers State.

The 2019 budget is premised on an oil price benchmark of $55 per barrel, which is $5 lower than that of the Federal Government; and it is also lower by N30billion than the state’s 2018 budget which was N510billion.

Christened the budget of Sustainable Growth and Development, the governor proposed N323.2billion as capital expenditure, while Recurrent Expenditure will gulp N157.1billion.

The governor proposed N72 billion, which is 24 percent of the total capital budget, for the construction and improvement of the State’s road network and transport infrastructure. He said 15majors roads, three flyovers and a host of internal roads in the rural areas will be completed in 2019.

Governor Wike proposed the sum of N18billion security, N17billion for the Bureau for Special Projects to fund the completion of land reclamation in three local government areas as well as N25billion to fund healthcare delivery in the State. He said key projects in the sector will be completed and delivered in 2019.

Through the recurrent proposals, Governor Wike accommodated the expected N30,000 new minimum wage for the state and the handling of the pension challenges facing the state.

“With this, the State Government will be in a position to pay the minimum wage whenever the National Assembly approves it. We also made provisions for staff promotion arrears and new recruitments into the State’s civil service.

“The sum of N33billion is proposed for the settlement of pension liabilities. The challenge about the plight of pensioners has lingered for too long and we are determined to tackle it this time around. Certainly, our senior citizens deserve better treatment than what they are presently getting”.

“We came in with a clear vision and mission: a vision to repair and renew the promise of our State; a mission to pull our people from the cesspool of despair and restore our hopes for brighter future. Three and half years after, we have substantially achieved our commitments on all directions of human advancement.

“Under our watch, Rivers State has emerged from the brink of economic disaster to an era of fiscal sustainability. Today, our Gross Domestic Product has increased and our economy is growing at a rate above the national average and attracting new investments even when the national economy continues to be weak, wobbly and troubling.

“Under our guardianship, we have invested at record levels to provide critical social and economic infrastructure across the State; especially roads, schools, and health facilities. In the process, we created hundreds of thousands of jobs across the construction value chain”.

Wike said the 2019 budget is intended to consolidate on the administration’s achievements and enable it to put the State on an irreversible path to sustainable economic growth and development.