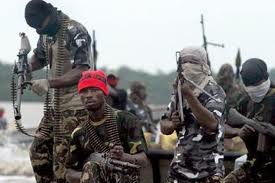 13 February 2012, Sweetcrude, WARRI — A former militant leader and spokesman of the disbanded Niger Delta Liberation Force (NDLF), “Captain” Mark Anthony, weekend, revealed measures the Federal Government ought to take to ward off fresh hostilities by Movement for the Emancipation of the Niger Delta (MEND).

Admitting that he knew the new “Commander” of MEND and that he called him before the recent bombing of Agip trunk line in Bayelsa State, Anthony, whose group capitulated after its leader, John Togo, was killed by the Joint Task Force (JTF) last year, said it was the inaction on the part of government that made MEND to re-group.

To avert the looming disaster, he said: “I have said it before, government should disarm NDLF (and) all other armed groups willing to do so. There would have been more attacks by the group (MEND), but, chairman of the Presidential Amnesty Programme and Special Adviser to the President on Niger Delta, Mr Kingsley Kuku asked me to intervene and that was why there have been no further attacks.”