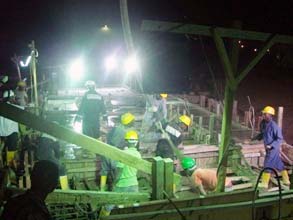 08 March 2012, Sweetcrude, ABUJA – The Federal Government’s plan to attain over 7,000MW of electricity before the end of the year may be finally be possible with the planned injection of over 3,540 mega watts of electricity into the national grid through the National Integrated Power Projects, NIPP.
The total power generation for the ten power projects in the next two years is expected to reach about 10,000 MW in 2014.
The Managing Director of the Niger Delta Power Holding Company, NDPHC, Mr. James Olotu, who stated this on Monday during a briefing with journalists in Abuja, claimed that reports which stated that the former President Olusegun Obasanjo expended $16 billion on the National Integrated Power Projects were utterly unfounded.
“The total sum committed to the projects prior to the National Assembly probe for the projects was only $3.078 billion out of which only about $2.87 billion was paid out, and not $16 billion as had been reported over the years.
Presently, he added, the Federal government plans to invest over $5.75 billion in the National Integreted Power Projects. “The cost of the entire project is $5.75bn. The amount yet to be received as part contribution is $235million. However, what was spent so far is just half of the total money put at $5.75bn,” he said.
Olotu stressed the challenge posed by insufficient gas supply to the power plants had caused the late take-off of many of the units thereby affecting capacity operation by the plants.
He noted that, “As we speak many of the power plants are running below installed capacity due to the challenge of acquiring gas to power them. For example, the Olorunsogo Power Plant has only four out of the installed six units and only about one and a half of them are functioning due to gas constraints.
“Also, in the Sapele Power plant, we have completed two units out of the four, and we have about 225MW that can enter the grid anytime. The moment constraint of gas is removed, the whole units can be operated.”
He said, however, that the NDPHC with the support of the Ministry of Power and the Ministry of Petroleum Resources was working hard to resolve challenges faced by gas suppliers, adding that Nigerians should expect improved power in the coming weeks and months.
According to him, “In the next few weeks, precisely at the end of March, we expect to inject about 553MW of electricity into the national grid. By December 2013, we will be ready to pump in about 3540MW into the national grid.
Olotu explained that most of the money committed are in form of letters of credit and not cash to the contractors as Contractor can only draw such money based on milestone achievement that was satisfied by the project consultant and the client (NDPHC).
He noted that the stoppage of the power projects at the end of the Obasanjo regime and the probes that followed had negatively affected the realization of the projects, pointing out that the episode created a lot of frustration for investment within the sector.
He added that, “The investigations that came about at the end of the Obasanjo government had dampened operations within the industry, as it affected proposed arrangements for gas supply to these plants, and forced most of the stakeholders to operate on their own with little or no cooperation in achieving individual goals.”
According to him, “NIPP remains the only hope for the country for sustainable growth in power generation and transmission. Power generation is a very complex process, and we have some of the best project managers and engineers who can deliver on government’s plan to have reliable power to every nook and cranny of the country.”