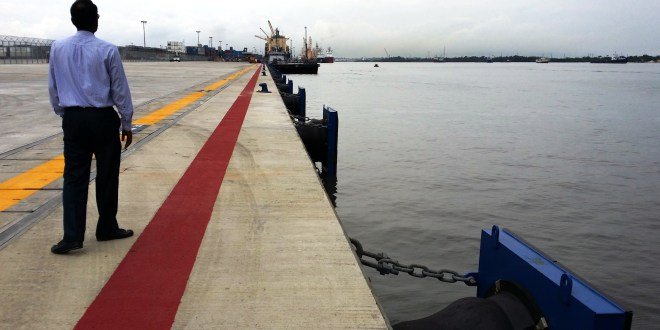 *Section of the Ibom Deep Seaport.

01 October 2018, Sweetcrude, Port Harcourt — Akwa Ibom State Government has hinted that the ground-breaking for the commencement of the construction of Ibom Deep Seaport should be expected by the end of November 2018.

Akwa Ibom State Commissioner for Housing and Special Duties, Mr. Akan Okon, who gave the hint at the weekend during a dinner with journalists, said the seaport is very viable and would be an alternative to Lagos port, as its draft is two times the size of Lagos seaport.

Okon, who assured that the Ibom Deep Seaport project, is on course and will soon be a reality for the good of the state and the country at large, said the project is jointly financed and promoted by Akwa Ibom State Government and the Federal Government through the Federal Ministry of Transportation.

He explained that the project was being engineered by the Ministerial Project Development Steering Committee, MPDSC, which was set up by the Federal Ministry of Transportation, and consists of the ministry representatives, Nigeria Port Authority, ICRC, the programme Manager, ICPC and EFCC, members of the Technical Committee and the state government.

According to him, “With the level that we have reached and the timetable that we have, by the end of November 2018, God willing, there should be a groundbreaking. So, Ibom Deep Seaport is a reality for the good of Akwa Ibom State and Nigeria.

“Let me also make this clear. Almost all the bidders that were shortlisted have visited the site of the project, they have done their studies and I can tell you that from their designs, they have a minimum of 16.5 metres draft at the original location of the project, which is Ibaka.

“This is the best for modern vessels as against Lagos port that has 8metres draft. So, our draft is an attraction for many shipping lines because modern vessels can come directly to the port and discharged. Our seaport is very viable and it is the best alternative for the Lagos port.

“One of the considerations that was given for the selection of the preferred bidder was that such a bidder must not just be a construction company but must have a shipping line with the financial muscle. We had a consortium that was made up of top 10 cargo companies in Europe and top 10 in construction firms in China, they are coming together to build the Deep seaport,” he added.

The Commissioner who gave a timeline of the Ibom Deep Seaport Project, said upon assumption of office in 2015, Governor Udom Emmanuel, set up a Technical Committee, headed by a former Director General of NIMASA, Barr. Mfon Usoro, with the responsibility of ensuring that the Seaport project is realized.

He explained that the Committee has kept the ground running, and was almost at the closure stage, adding that every process leading to where to the project is being approved by the Federal Ministry of Transportation since seaport development was in the Exclusive List.

He said currently, the committee has been able to come up with the preferred bidder and the reserved bidder for the project and as soon as it is approved, the full business case will be sent to the Federal Executive Council for further approval, which would usher the commencement of construction of the project.

“The Procurement Process for the Seaport development was approved by MPDSC on the 24th of December 2017 and on the 8th of January 2018, the Request for Qualification, RFQ, from interested investors was published all over the world.

“Based on that submission, on the 20th of March, 2018, that RFQ was opened and evaluation is done by MPDSC and at the end of that evaluation, three of the companies were prequalified, that is to say, they made the requirement that was published.”