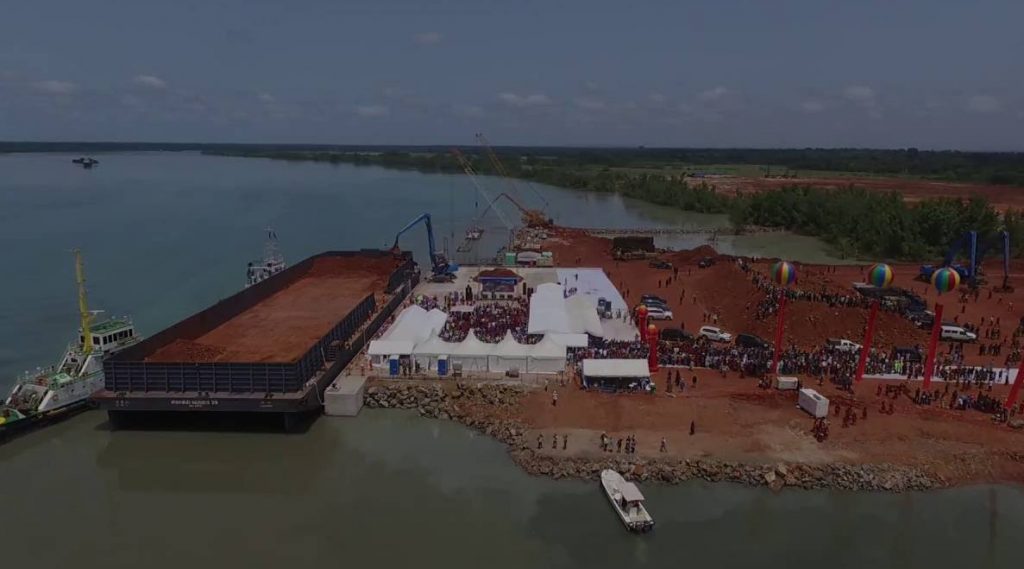 05 December 2017, Sweetcrude, Conakry, Guinea — The SMB-Winning consortium (http://SMB-Guinee.com), a major player in the bauxite sector, presented to Alpha Condé, President of the Republic of Guinea, a project to build an Alumina refinery in Guinea as well as a railway to open up the Boffa corridor and to carry bauxite to the refinery and the Dapilon river port. The total investment planned for the whole project is estimated at $3 billion.

The feasibility and social and environmental impact studies will be carried out as soon as early 2018 for a start of works planned in 2019. The construction phase will create 10,000 jobs and mobilize local companies, among which experts in civil engineering, extraction, construction, and services. The refinery will be located in Dapilon, in the Boké Special Economic Zone.

“This investment illustrates our ambitions for the Boké region, and our contribution to Guinea’s economic and social development. The mining sector, together with agriculture, is the lung of the country’s development and, in our approach as a mining operator, must also focus on facilitating a local redistribution of the benefits, especially in favor of the communities, education, jobs, and priority sectors such as the agro-industry”, comments Frédéric Bouzigues, Managing Director of Société Minière de Boké (SMB).

“The local processing of raw materials is one of the biggest challenges for a more inclusive growth in Africa because it creates more value locally while leading to economic diversification. This commitment to Guinea also demonstrates our confidence in the continued improvement of both its business environment and macroeconomic stability. This project also demonstrates the technical and financial complementarity of our Franco-Sino-Singaporean consortium to carry out this type of ambitious projects”, said Fadi Wazni, Chairman of SMB.

Founded in 2014, the SMB-Winning consortium brings together three partners in the fields of bauxite mining, production and transportation: Singaporean shipping company Winning Shipping Ltd, UMS, a French-owned transport and logistics company that has been present in Guinea for over 20 years, and Shandong Weiqiao, a leading Chinese company in aluminum production. The consortium has planned to export 30 million tons of bauxite in 2017, making Guinea the world’s largest exporter of bauxite and the consortium one of the major contributors to the country’s gross domestic product.