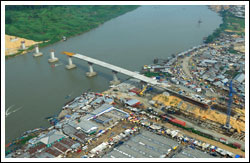 It was gathered that the incident occurred between 9.30 and 10pm at the riverside settlement of Obogoro in the Yenagoa local government area of Bayelsa when most of his subjects had retired to bed.

The serene settlement is less than five minutes ride by boat from mainland Yenagoa, the state capital.

The royal father in his seventies witnesses told Saturday Vanguard had also retired to bed when he was unceremoniously whisked away from his residence by the armed gunmen suspected to be commercial kidnappers.

Sources from the area told our correspondent that the natives were jolted from their sleep by sporadic gunfire that rented the air forcing those outside to scamper for safety.

The attack the first of its kind in the usually peaceful settlement some distance away from the Bayelsa Government House came as a surprise to many giving the unassuming disposition of the royal father and the recent lull in cases of abduction in the state.

It was also gathered that the armed gunmen stole into the sleepy community in a speedboat under the cover of darkness to carry out their nefarious act.

A family source told our correspondent that the armed men arrived at the home of the paramount ruler and knocked. The door was reportedly opened by the young daughter of the monarch was asked at gun point the whereabouts of the father.

It was gathered that the royal father, who is also a First Class Ruler in the State Traditional Rulers Council, was forcefully woken up from sleep and ordered to march towards the waterfront.

All plea by the traditional ruler for him to put on a trouser before being taken away fell on deaf ears.

He was reportedly dragged away at gunpoint into their waiting boat before disappearing into the labyrinths of the creek by the hoodlums who allegedly fired a warning shot into the air to underscore their seriousness.

As at the time of filing this report, the kidnappers had not establish contact with their victim family while the state police command had dispatched men to the area to gather information that would assist them in their investigation.

When our reporter visited the riverside community, sympathizers had besieged the residence of the monarch to reassure the wife, Mrs. Kaetty Igodo, her children and other family members that they are not alone.