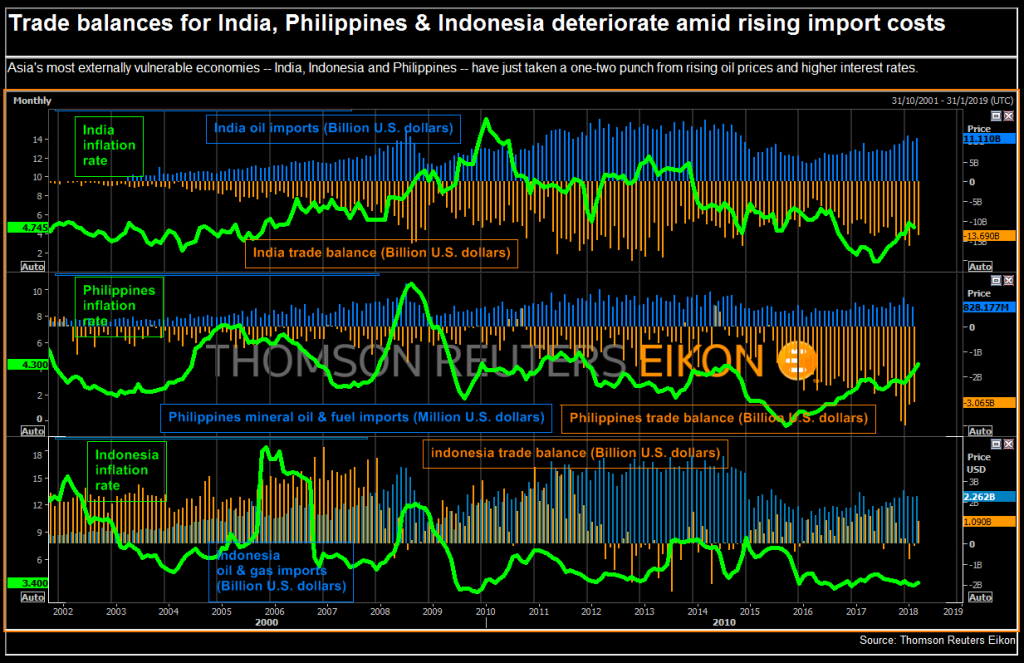 U.S. 10-year Treasury bond yields US10YT=RR hit 3 percent this week, a level long touted as one to watch for potential portfolio outflows from the region, where interest rates have barely shifted since the U.S. Federal Reserve began slowing hiking policy rates in late 2015.

An even bigger worry is that oil prices hit 3-1/2 year highs: not only do these countries run the biggest current account deficits of Asia’s major economies, but they are also among region’s most voracious oil importers.

If oil prices stay at their current levels of around $75 a barrel LCOc1, projections for inflation, growth, budget and trade deficits could be missed, increasing selling pressure on the trio’s currencies, stocks and bonds – already among Asia’s worst performers – and potentially forcing their central banks to raise interest rates sooner than they otherwise would.

Higher rates could, in turn, hurt growth and budgets, creating a self-feeding loop that further erodes confidence in local assets.

In its projections for growth and inflation, Indonesia’s central bank said it works on an assumption of oil at $60 a barrel. The Philippines’ said it works with $55-$70, while India, according to two finance ministry sources, works with $65.

These averages might still be attained if oil prices drop back, but the recent run-up has prompted many analysts to call an end to the oil market slump that started in 2014 and prompted hints that policymakers’ assumptions are changing.

In February, the Philippines central bank raised its 2018 inflation projection to 4.3 percent, from 3.4 percent previously, mainly due to higher oil prices, but expects this to be a temporary breach of its 2-4 percent target.

At the start of the year, it was expected to raise interest rates once or twice in 2018. Now some analysts see three hikes. India and Indonesia were the last major central banks in Asia to cut rates last year and were mostly expected to stay put throughout 2018, but analysts say hikes are now on the table.

Indonesia said on Tuesday it had been selling foreign currency in “quite a sizeable amount” to halt the rupiah’s depreciation since last week. At an IMF meeting in Washington on Sunday, Reserve Bank of India (RBI) governor Urjit Patel flagged oil prices as a growing risk for inflation.

“Philippines – three interest rate hikes are expected in the next three meetings. If oil prices stay at these levels, then RBI may have to raise rates … Indonesia is the next country to watch,” said Robert Subbaraman, chief economist for Asia ex-Japan at Nomura.

And things are getting worse.

Indonesia’s crude oil imports bill rose by $1 billion, or 54.5 percent on the year, in January-March 2018. The Philippines significantly scaled back oil imports in the first quarter, but still spent $130 million more than the year-ago total. India’s oil imports cost rose by $5 billion, or 26 percent in the same period.

The Philippine peso PHP=, Indonesian rupiah IDR= and Indian rupee INR= have lost around 5 percent from their early January highs. Indian stocks. NSEI fell around 6 percent, Indonesia’s. JKSE 11 percent and Philippines’ 17 percent. Ten-year bond yields are up 40 basis points (bps) in India IN10YT=RR, and more than 100 bps in Indonesia ID10YT=RR and the Philippines PH10YT=RR over the same period.

By contrast in South Korea, also a major oil importer, but one that runs a trade surplus, the won KRW= is steady stocks. KS11 are up and bond yields KR10YT=RR are marginally higher.

Analysts see the selling pressure intensifying. This week, Maybank revised its end-2018 rupee forecast to 66 per dollar, around current levels, from 63.50 previously and ANZ revised it to 67 from 66.

“We think the surge in oil price is a key game changer for the rupee as the rise in oil prices present a double whammy on India: one, in terms of current account deterioration and two, in terms of upside risks to inflation,” Maybank analysts said.

NEW PROJECTIONS
To be sure, all three countries are considered to have adequate foreign exchange reserves and the current account positions of India and Indonesia are better than during the previous lengthy period of outflows from Asia in 2013-2014, prompted by the Fed’s first signals that its unconventional easing measures were about to be rolled back.

FILE PHOTO: An employee (R) fills up a motorbike’s gas tank at a petrol station, as his reflection is seen in a cashier’s glass booth, in Manila April 23, 2008. REUTERS/Cheryl Ravelo/File Photo
Reuters Graphic
Higher oil prices could make those economies more vulnerable, but are unlikely to cause panic.

In a note in February, ANZ said an average oil price of $80 a barrel could add 40-50 bps to inflation in each country.

Fuel prices are especially politically sensitive in Asia’s poorer countries, and a further risk is that higher costs could push governments to raise subsidies or introduce tighter regulation on prices, which could contain inflation but hurt central budgets and energy firms.

In Indonesia, state oil firm Pertamina is shouldering the burden of subsidies as the government has pledged to keep prices unchanged for two years. India has not taken any such measures.

“I would classify (subsidies) as a policy mistake, because it means reallocating fiscal resources in an inefficient way,” said Alexander Wolf, senior emerging markets economist at Aberdeen Standard Investments. “That could erode confidence.”