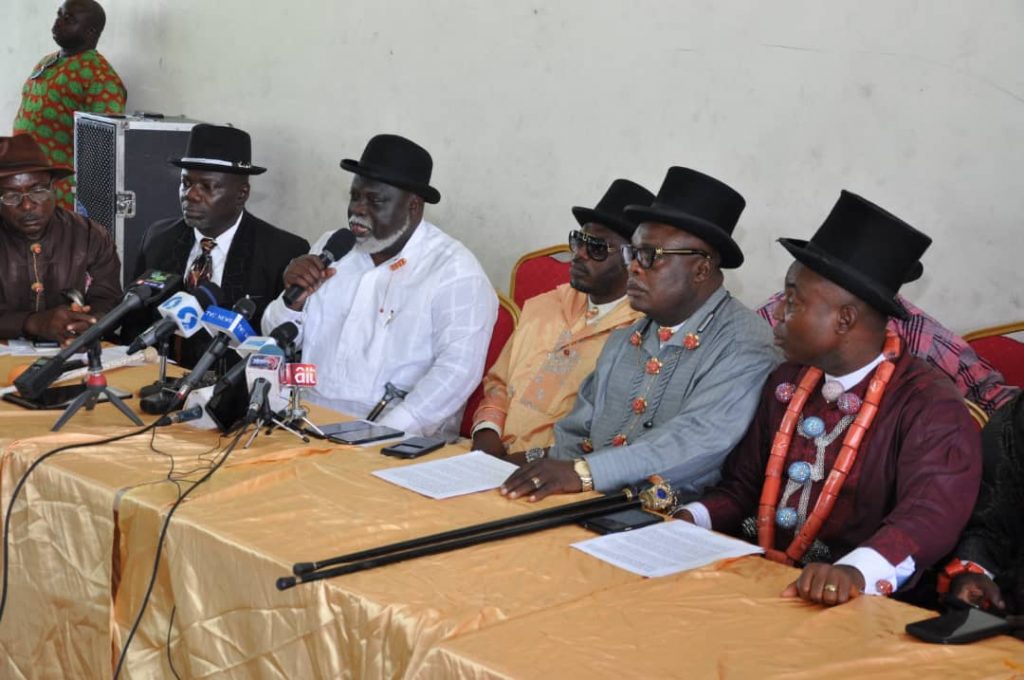 Port Harcourt — Host communities of OML25 comprising of Belema, Offoin-Ama and Ngeje, Tuesday appealed to the Federal Government to caution Governor Nyesom Ezenwo Wike, against causing another round of violence in the area, following the peaceful resolution of dispute on OML25 between NNPC, SPDC and Belemaoil.

This is as the Rivers State Government had issued a circular inviting stakeholders to a fresh meeting on OML25 in the office of the Secretary to the State Government, despite the resolution and reopening of the Belema flow station and gas plant by Special Adviser to the President on Niger Delta, Sen. Ita Enang, on October 10th, 2019.

This was after the official re-opening of OML-25 Flow Station held on the 28th of September 2019, where the GMD of NNPC Mr. Melee Kyari and the Minister of State for Petroleum, Chief Timipre Sylva, led a high powered delegation to perform the ceremony.

But the host communities of OML25 have said that the meeting called by the governor is politically motivated and a potential threat to the recent peace accord on the resolution of OML25 dispute by the GMD of NNPC Mr Mele Kolo Kyari and the Minister of State for Petroleum Chief Timipre Sylva at the instance of Mr. President.

Speaking at a press conference in Port Harcourt, the traditional leaders of OML25 host communities wondered why the vested interest of the Rivers State Government on OML-25 given that the issues have been resolved and peace restored to the area.

Spokesperson of Belema Community, Chief Fiala Okoye-Davies, called on the Federal Government to place a caution on the governor, to obey constitutionally and follow civility in the governance of the people whom he swore an oath to protect, instead of balkanising the communities.

Okoye-Davies said the meeting was a ploy by the Rivers state government to use OML-25 to patronise their political loyalists and cronies at the expense of the legitimate stakeholders, maintaining that the issues of OML25 are within the purview of the Federal Government as it falls under the exclusive list of the Nigerian Constitution.

“It is true that with the peace initiatives of the federal government which culminated in the peaceful agreement between NNPC, SPDC and Belemaoil which was initiated and supervised by the GMD-NNPC, Mr Melee Kyari and the Minister of State for Petroleum Chief, Timipre Sylva, at the instance of President Muhammadu Buhari, it was understood that the issues of OML25 had been finally resolved.

“While our communities are celebrating these peace and developmental initiatives of the federal government, and after less than one month of the official reopening of OML25 and the hoisting of the flags of NNPC, SPDC and BPL signaling a new beginning on the 10th of October 2019 by the Special Adviser to the President on Niger Delta, Senator Ita Enang, we were alarmed last week when we learnt of a circular issued by the Rivers State Government inviting stakeholders to a meeting on OML25 (Kula Kingdom).

“It is our view that the so-call meeting holding at the Office of Secretary to the Rivers State Government is politically motivated and a potential threat to the recent peace accord on the resolution of OML-25 dispute by the GMD of NNPC Mr Mele Kyari and the Minister of State for Petroleum Chief Timipre Sylva at the instance of Mr. President.

“The NNPC which is the major JV partner and other major shareholders of OML-25 as well as the legitimate Host Communities were not consulted or invited by the Rivers State Government for the meeting which in our view is illegal and unnecessary.

“The action of the Rivers State Government is tantamount to superimposing the interest of non-stakeholders and a docile minority over the rightful aspirations and yearning of active majority and legitimate stakeholders of OML-25. This is akin to military junta, absolute monarchy, dictatorship and autocracy instead of a democratic governance.”

The host communities of OML25 further disclosed that the oil wells in OML25 are not in Rivers State, advising the Rivers Government to mind its business and stop creating confusion in its affairs, but rather should be more interested in resolving the boundaries issues with Bayelsa State.

“We the OML-25 Communities are resolute and shall remain calm in the face of repeated provocations by those who have sworn that we will never develop.

“As far as we are concerned our development now lies in the shoulders of NNPC-GMD and our illustrious son Mr. Tein Jack-Rich whom the NNPC-GMD have publicly pledged to us.

“It is worthy to note that Belema & Oko-Ama communities wherein OML25 is situate is in Bayelsa State and not Rivers State by the 11th administrative map of the Federal Government. This Matter is subsisting before the apex court.

“Conclusively, we have reflected that His Excellency when he was the Minister of State for Education, was instrumental to the ceding of OML25 to Bayelsa State. Until that position is reversed, common sense alludes to the fact that OML 25 is in the territory of Bayelsa State and doesn’t require the steer of the Rivers State.”

For its part, the Pan Niger Delta Forum, PANDEF, called on the Rivers State Government to steer clear of OML25 host communities, especially since the Federal Government through the Ministry of Petroleum Resources and NNPC had already peacefully resolved the crisis.

Publicity Secretary of PANDEF, Chief Anabs Sara-Igbe, said it was surprising that the Governor is fanning the embers of crisis in OML25 communities, whereas, he (the governor) had refused to honour the invitation to resolve OML25 issue with the Federal Government.

“Inspite of our cry as a people, the Rivers State Governor who claim to be concern over our plight has never visited the area nor sent a delegation to see the level of neglect, under-development and backwardness of the host communities which produces over 45,000bpd and 103,000mcf of gas per day amounting to billions of revenue accruable to the federation account.

“The Governor who declared environmental sanitation on September 28, 2019, when he knew the Minister of State for Petroleum Resources, Chief Timipre Sylva and the NNPC Group Managing Director, Mr Mele Kyari, were coming to reopened OML25 flow station and gas plant.

“We call on the governor to steer clear of our communities in the face of injustice, because the international communities are watching. We need peace in the Niger Delta, in Rivers State and our communities,” PANDEF said.