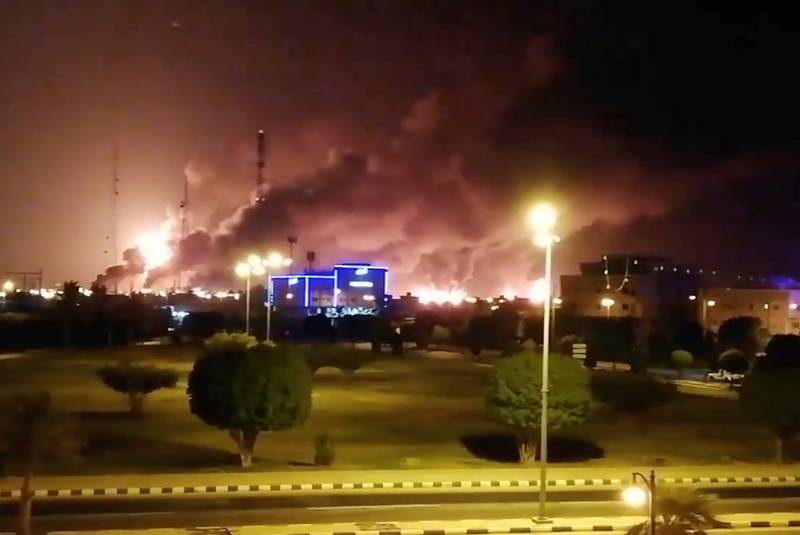 The pre-dawn drone attack on the Saudi Aramco facilities sparked several fires, although the kingdom, the world’s largest oil exporter, later said these were brought under control.

Three sources close to the matter said oil production and exports had been affected. One source said 5 million barrels per day of crude production had been impacted — close to half the kingdom’s output — but did not elaborate.

State television said exports were continuing, however Aramco has yet to comment since the assault, which the Houthis said involved 10 drones. Authorities have not said whether oil production or exports were affected.

The attacks come as Aramco accelerates plans for an initial public offering of the state oil giant to as early as this year, and follow earlier cross-border attacks on Saudi oil installations and on oil tankers in Gulf waters. Saturday’s attacks appeared to be the most brazen yet.

Saudi Arabia, leading a Sunni Muslim military coalition that intervened in Yemen in 2015 against the Houthis, has blamed regional rival Shi’ite Iran for previous attacks, which Tehran denies. Riyadh accuses Iran of arming the Houthis, a charge denied by the group and Tehran.

Authorities have not reported on casualties. A Reuters witness nearby said at least 15 ambulances were seen in the area and there was a heavy security presence around Abqaiq.

“A successful attack on Abqaiq would be akin to a massive heart attack for the oil market and global economy,” said Bob McNally, who runs Rapidan Energy Group and served in the U.S. National Security Council during the second Gulf War in 2003.

Many Western employees of Aramco live in Abqaiq. The U.S. Embassy in Riyadh said it was unaware of any injuries to Americans from the attacks.
“These attacks against critical infrastructure endanger civilians, are unacceptable, and sooner or later will result in innocent lives being lost,” the embassy quoted Ambassador John Abizaid as saying in a Twitter post.

The three sources said Aramco had raised emergency levels and was holding a crisis meeting after the assault.

It was the latest in a series of Houthi missile and drone strikes on Saudi cities that had largely been intercepted, but have recently hit targets, including Shaybah oilfield last month and oil pumping stations in May. Both those attacks caused fires but did not disrupt production.

“This is a relatively new situation for the Saudis. For the longest time they have never had any real fears that their oil facilities would be struck from the air,” Kamran Bokhari, founding director of the Washington-based Center for Global Policy, told Reuters.

He said Riyadh had in the past largely protected oil assets against vehicle-borne explosive attacks by militant groups.

FLAMES, PLUMES OF SMOKE
Hours after the Houthi strike in Abqaiq, the Reuters witness said fire and smoke were still visible but had started dying down. Earlier video footage verified by Reuters showed bright flames and thick plumes of smoke rising toward the dark pre-dawn sky. An emergency vehicle is seen rushing toward the site.

The Saudi interior ministry said Aramco industrial security teams fighting the fires since 0400 (0100 GMT) had managed to control them and stop their spread. It did not identify the source of the drones but said an investigation was underway.

The Houthis’ military spokesman, without providing evidence, said drones hit refineries at both Saudi sites, which are over 1,000 km (621 miles) from the Yemeni capital Sanaa, and pledged a widening of assaults on Saudi Arabia.

The chief of Iran’s elite Quds Force, Qassem Soleimani praised the Houthis for their resistance in a Twitter post.
Tensions in the region have escalated in recent months after the United States quit an international nuclear deal and extended economic sanctions on Iran.

Fellow Gulf OPEC producers the United Arab Emirates and Kuwait voiced support for any measures by Saudi Arabia to safeguard its security.
The violence is complicating U.N.-led peace efforts to end the Yemen war which has killed tens of thousands and pushed millions to the brink of famine. The conflict is widely seen as a proxy war between Saudi Arabia and Iran

The coalition intervened in Yemen to try to restore the internationally recognized government ousted from power in Sanaa by the Houthis, who say they are fighting a corrupt system.