How kerosene fire explosion razed a motel in P/Harcourt 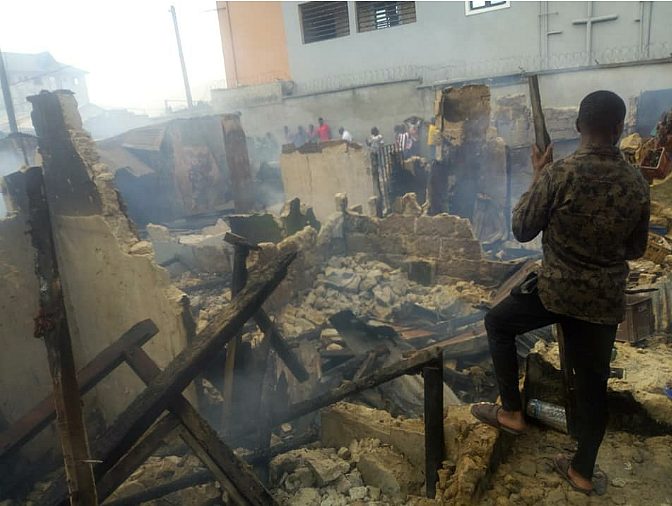 *The brothel completely razed by fire

Adulterated kerosene, popularly called kpo-fire in the Niger Delta, is gotten from illegally refined and improper catalytic cracking of crude oil, stolen through vandalisation of pipelines owned and operated by oil firms.

Witnesses say the fire, which destroyed everything inside the building, started from a restaurant amongst the shops within the brothel, razing down all the 20 rooms in the building, while no casualty was recorded.

An eye-witness who pleaded anonymity disclosed that the fire exploded when adulterated kerosene, popularly called kpo-fire, which a food vendor inside the restaurant was cooking with, inside the kitchen.

The eye-witness said the adjoining houses around the brothel was spared due to the help of area boys and good spirited Nigerians, who resorted to self help in order to put out the fire, without the presence of fire service.

He expressed displeasure at the way which the Rivers State Fire Service failed to respond to distress calls, which would have saved the building before it was completely razed. 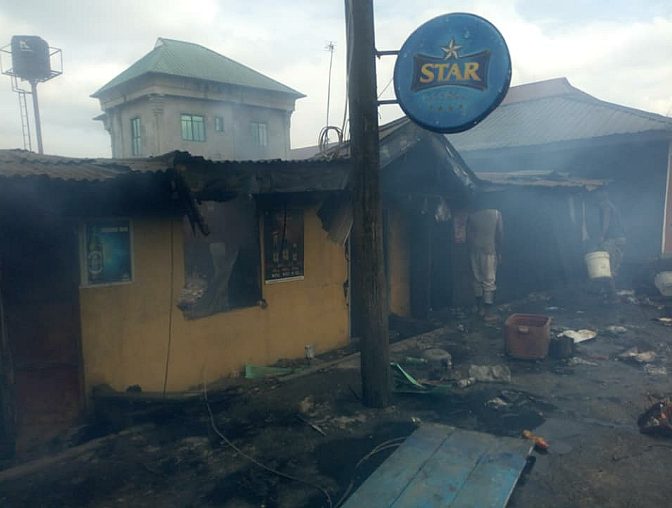 “The fire started at a restaurant where a woman who sells mama-put was trying to fry something, before the fire exploded into the groundnut oil in the frying pan she was using, due to kpo-fire kerosene.

“Every attempt to reach the fire service proved abortive as all their lines were ringing with no one answering their calls, but we resorted to self help with the help of area boys.

“Even the Commissioner for Special Duties was called, so as to urgently attract the fire service, but all to no avail. Even some policemen also came to the scene but could not do anything since there was no men of the fire service on ground.”

For his part, the Director of Pedro Motel, Ambassador Prince Ihunwo, said the fire which was caused by the food vendor, began in his presence, before it escalated despite all efforts to put off the fire.

Ihunwo is calling on well meaning Nigerians and all relevant government authorities to come to his aid.

Speaking on the development, the Nigerian Security and Civil Defence Corps, NSCDC, has again warned members of the public against patronizing illegally refined petroleum products.

Spokesperson of NSCDC, Rivers State Command, Akin Oguntuase, told our correspondent that adulterated kerosene was highly combustive, hence it is suicidal to use it indoors.

“Kpo-fire kerosene is highly combustive. We have warned people to desist from using it. I have been on the radio campaigning against it but people are not listening.

“Even though it is cheaper, but the risk is higher. So we’re saying if you must use it, ensure you’re cooking outside the house, because the product is highly combustive sine it’s not properly refined, hence any little thing can trigger explosion.”