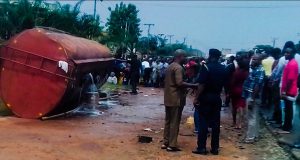 07 June 2018, Sweetcrude, Port Harcourt – The tank of a petroleum truck laden with 36,000 litres of Dual Purpose Kerosene – also known as domestic kerosene – on Wednesday disengaged from the truck head and fell along Port Harcourt Road in Owerri, spilling its content worth N7 million.

The incident took place around 12.30pm in the failed portion of the Port Harcourt-Owerri highway, at the back gate of Imo State Secretariat Complex, beside Owerri City Development Authority and opposite INEC secretariat complex in Owerri, leading to a serious gridlock for vehicles plying the route.
Although another truck came after few hours to trans-load the product, residents of Owerri had a field day, scooping the product with buckets, basins and kegs as it gushed out from the fallen truck.
The truck driver was visibly grieved, helpless and almost in tears.
The tanker, according to Imo State Petroleum Marketers and Dealers Association, was loaded from a depot in Port Harcourt and heading to discharge its content in Owerri before the incident occurred.
Public Relations Officer of Imo State Petroleum Marketers and Dealers Association, Engr. Okey Mbeku told our correspondent that the products in the truck was worth over N7 million.
Mbeku, who blamed the dilapidated nature of the road for the accident, lamented that the loss was coming at the time kerosene was scarce and expensive in the country.
He said: “The product was actually loaded in Port Harcourt and heading to Owerri. Due to the bad road, according to what the driver told me, the tank disengaged from the truck head and somersaulted on the road.
“As you can see people are fetching the product and we are trying to avoid fire explosion.
“We had to bring another truck so we can trans-load some of the product to another truck, and also save the secretariat from fire, because of the density of the sun.
“The truck is 36,000 litres and products inside is worth over N7 million. Unfortunately, this is coming at the time when people are complaining of kerosene scarcity.”
Security agents at the scene tried to no avail to stop people from fetching the product as they themselves were also fetching from the fallen truck.
Commuters expressed worries that the situation, if not controlled, might lead to an explosion due to the intensity of the sun at that time of the day.
A middle-aged man, who gave his name as Nwabueze Ezejiuba, regretted that he could not get a bigger container to fetch the product.
Ezejiuba explained that kerosene was sold at N250 per litre in Owerri, and he was not scared of explosion because the content was not the highly inflammable premium motor spirit, otherwise known as petrol.
“I was in the office and we heard a big bang, then we all rushed outside to see a tanker down beside the road and its content gushing out.
“Immediately, as if they were all waiting for it, people came out and started fetching. I also had to run to get a pail to fetch, unfortunately, I couldn’t get a bigger bucket.
“Many people have fetched in different sizes of the bucket, some people even fetched in booters. I think the driver was on high speed and the road is very bad.
“In Owerri here, we are buying kerosene at over N250 per litre. The police should allow us to fetch,” he said