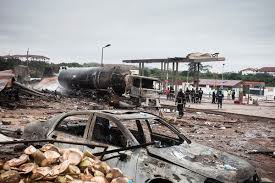 Port Harcourt — No fewer than three persons lost their lives, while others sustained different degrees of injury in an auto accident involving a truck and a tricycle, at SG Petrol Station along Urua-Ekpa junction, in Uyo, Akwa Ibom State capital.

The accident, our correspondent gathered, occurred during the early hours of yesterday, when a Mack truck heading towards Calabar-Itu Road, with registration number, Rivers BNY137XA, rammed into SG filling station, killing three persons instantly and leaving several others injured.

An eyewitness who gave his name as Ubong, explained that the truck driver skidded off the road while trying to dodge a tricycle rider who recklessly crossed the road against traffic.

Ubong said the truck rammed into SG filling station, destroying three tricycles inside the petrol station beyond repairs, adding that the truck driver was nowhere to be found, as passersby thronged to the accident scene.

According to him, “I was just directly opposite SG Filling Station when the truck came from Itam junction, probably on its way to Calabar. There was a Keke driver trying to cross the road so while trying to avoid the Keke, the truck diverted and ran into the filling station.

“Three people who were standing there were crushed by the truck, and about three Keke vehicles were also damaged beyond repair.”

However, the Federal Road Safety Corps, FRSC Akwa Ibom State Command, has put the causality figure at two, including a man, woman and two injured.

Sector Commander of FRSC in Akwa Ibom State, Sunday Oghenekaro, while confirming the accident, blamed the crash on the recklessness of tricycle riders and called for serious orientation and licencing of tricycle operators.

“From the information I have received from my field officers, two people including a man and a woman died and two were injured. The incident happened due to recklessness of the tricycle rider who was trying to cross the road. The truck was trying to avoid him before it finally crashed.

“This is the issue we have been emphasising to them (tricycle operators) that there is need for them to be enlightened and licensed before getting into the road.

“But because of money, some of them will jump in to the road and the result is what we are seeing today. They are supposed to be properly licensed before operating on the roads,” FRSC said.