How Rivers community barricade Navy with petrol tankers over MoU 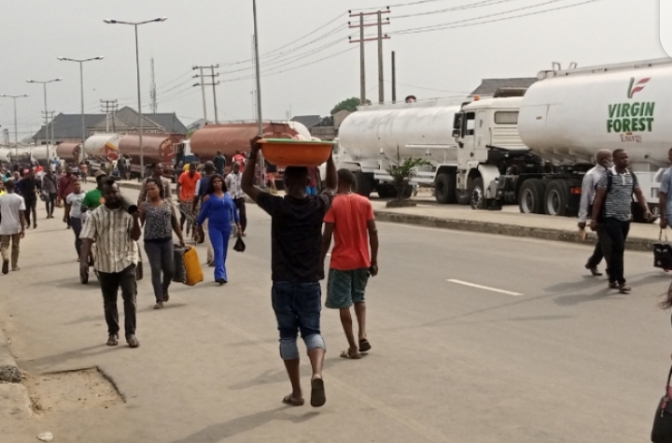 Port Harcourt — Normalcy has returned to Rumuolumeni community in Obio/Akpor, Rivers State following the intervention of the State Government, Police and Nigerian Navy Ship, NNS Pathfinder, who prevailed on the youths to clear the blockade mounted on the area.

Residents of the area were stranded throughout, following a blockade of all roads in the area by youths of Rumuolumeni, in a protest against NNS Pathfinder for arresting community leaders who were demanding employment and MoU from a firm, Ocean Marine Solutions Ltd., operating in the area.

Ocean Marine Solutions Ltd, according to Rumuolumeni community, is operating clandestinely inside the NNS Pathfinder’s Naval yard without an MoU with the host community.

Problem brewed when Navy invited the CDC Chairman of the Community, Ikechi Williams, and four other leaders of the community for a meeting and detained them for allegedly kidnapping some staff of Ocean Marine Solutions.

Following the detention of the community leaders, the aggrieved people of Rumuolumeni, blocked all routes into their community in protest, demanding immediate release of their leaders.

A Youth Leader, Felix Chinda, disclosed that the protest was against Nigerian Navy over the unlawful detention of their leaders who were invited for a meeting.

Chinda alleged that the Navy has for over eight years harboured the marine company within its premises and shielded the community from contact with the firm.

He claimed that the community had on several occasions, written NNS Pathfinder on the issue, regretting that Navy has not allowed the company interface with the community.

“The protest was against the inhuman treatment against us by the Navy. Rumuolumeni has been a peaceful community and we host a lot of companies and institutions. Since Navy came, we have never have it easy with them. They never support us during crisis.

“They will only come when the want to oppress us. Navy has hosted Ocean Marine Solutions in their premises for over eight years. We have written several letters to come in terms with the community they have refused. They have ignored us no one person has been employed.”

Vice Chaiman of Rumuolumeni Employment Bureau, Emmanuel Ikenga, said the development was a show of disrespect for the host community.

Ikenga threatened that the youths would remain on the road until their leaders were released and the marine company come to roundtable with the community.

“We are demanding employment in Ocean Marine Solutions, they have been there for over 20years now and being harboured by Navy in collaboration with the Commanding Officer.”

“Why will they arrest our representatives as if we do not have youths. Why will they come to our community to oppress us?”

A Joint Military Taskforce deployed to the area to ensure peace on Tuesday, were resisted by the rowdy session at the palace of the Paramount Ruler of Rumuolumeni, shortly after the officials of Rivers State government arrived for peaceful meeting with the community.

The protesting youths at the meeting demanded that the road blockade would be opened if the five leaders arrested by NNS Pathfinder on trump up charges were released and secured.

It took the intervention of the Rivers State Government, Nigeria Police and the community representatives to secure the release of the five community leaders arrested by NNS pathfinder, over allegations of kidnapping workers of Ocean Marine Solution, which the community accused of operating clandestinely inside the Naval yard without an MoU.