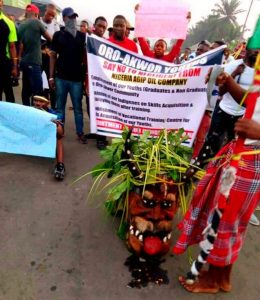 02 May 2018, Sweetcrude, Port Harcourt – Operations at the Nigerian Agip Oil Company, NAOC, in Port Harcourt was yesterday disrupted following a protest by the youths from Obio/Akpor Local Government Area of Rivers State, over alleged failure of the company to give employment to youths from its host communities.
The youths, numbering up to 1,000, made up of men and women, came with placards, drums and fetish items. They blocked the entrance to the company’s office, causing heavy gridlock around Eagle Island and Mgbuosimini, axis of Mile Four, Rumueme.
The protesting youths came demanding that the company provide employment and scholarships for youths of the area.
Leader of the protest and Obio/Akpor Youth President, Mr. Chijioke Ihunwo, said the protest was necessitated by failure of the  company to give attention to the needs of the host communities.
Ihunwo complained that the youths from the host community have not been fairly treated as it concerns empowerment, employment, welfare and other entitlements.
The youth leader, who expressed concerns that many youths from the host community are unemployed, alleged that they youths have written severally to demand their right but to no avail.
He accused the multinational of conspiring with few stakeholders from the area to deny them of their rights, insisting that they will remain at the gate unto their demands are meant.
According to him, ” As you can see, we are in Agip oil company in protest over unemployment, empowerment of our youths, over four hundred of our youths are unemployed, we have written to Agip without any response.
“Agip has failed us,we want them to come and answer us otherwise we will not allow them access into their premises,
“We are not fighting, as you can see the security agencies are here,we will remain here for seven days if they refuse to come to round table with us to arrive to one thing,we have suffered enough,we will not continue when we have what will make the youth go out of streets.”
However, SweetCrude authoritatively reports that leaders of the protest were later called in for a close door meeting with the management of the company, although  outcome of the meeting was not disclosed and every efforts made to reach the protester leader via phone calls and sms proved abortive.