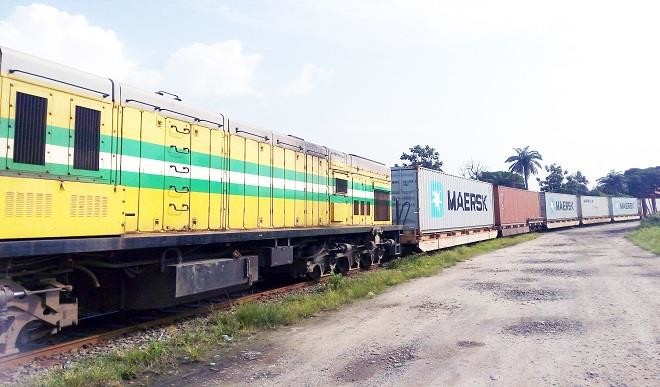 Lagos — In a bid to free the port access roads of the perennial gridlock, Nigeria’s foremost shipping and cargo logistics services provider, Hull Blyth, has opened a rail hub at Wasimi, Ewekoro Local Government Area of Ogun State, for use by importers and exporters.

The Wasimi Rail Hub, which is the first of its kind in Nigeria, will allow shippers receive import containers from Apapa port, and also send export/empty containers to the port by rail.

The Managing Director of Hull Blyth, Mr. Christian Holm, who disclosed this in Lagos on Monday, said the new rail hub will save shippers the hassles and high cost of transporting their containers to/from the port by road.

“We started this project because we are concerned about the pains shippers go through in moving their boxes in and out of the Apapa port in Lagos due to the congestion on the port access road.

“We are happy to inform all shippers in the southwest and other parts of Nigeria that they no longer have to go through the pains of trucking their containers to Apapa. Just send it to us at Wasimi and we will gladly move it to Apapa port by rail.

“Importers should also simply hand over their consignments to us at Apapa port and we will move it by rail to Wasimi from where it will be moved to final destination.

“It is time shippers took advantage of the rail services revived by the Federal Government and relieved themselves of the stress and high cost associated with road haulage,” Mr. Holm said.

The Hull Blyth Managing Director said that empty containers returned to the Wasimi Rail Hub will not attract demurrage, as it will be deemed to have been returned to the shipping company.

“The rail hub brings several benefits to the trading community and the Nigerian economy. In addition to reducing the cost associated with trucking containers by half, it will also save importers and their agents the money they spend on payment of demurrage.

“This is because we have agreed with shipping lines that containers delivered to the Wasimi Rail Hub from any part of the country will be deemed to returned to the shipping company and will not attract demurrage,” he said.

He said rail hub has commenced full operation, as the first train of both export and empty containers has been successfully delivered to APM Terminals at the Apapa port “within only hours of transit from Wasimi”.

Holm said the Wasimi Rail Hub will save importers, exporters and agents as much as 50 per cent of logistics costs, since it is much cheaper to move goods by train.

He said the Wasimi Rail Hub is the precursor to a Dry Port, which is already under construction. When completed, the Dry Port, will have capacity to handle up to 7,000 TEUs and will be fully connected to Apapa port by rail.

A beneficiary of the first train service, Ms Dede Yebovi of Quinet International expressed satisfaction with the ease of moving export from Ogun State by rail to Apapa port. She was particularly impressed that the service saved her company cost and provided faster transit when compared to road haulage.

With many years of experience and solid reputation as a multi-sector ship agent and cargo logistics services provider, Hull Blyth prides itself on the delivery of operational excellence and as a reliable partner for supply chain management.