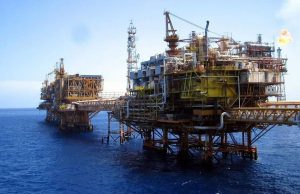 Houston/New York — More than a quarter of U.S. Gulf of Mexico offshore oil and gas production remained shut by Hurricane Sally, which was moving inland on Wednesday and dumping heavy rains and cutting fuel demand in the U.S. Southeast.

The storm made landfall early Wednesday near Gulf Shores, Alabama, as a powerful Category 2 hurricane, swamping the region with 10 to 20 inches (25-50 cm) of rain and boosting U.S. crude oil and gasoline prices. Some coastal areas received as much as 35 inches of rainfall, the National Hurricane Center (NHC) said.

Some 508,000 barrels per day of oil production and 805 million cubic feet per day (mmcfd) of natural gas output were shut in the U.S. Gulf of Mexico, according to the U.S. Interior Department. That is roughly a third of the shut-ins caused by Hurricane Laura, which landed further west in August.

Oil and chemical ports along the Mississippi River and the Louisiana Offshore Oil Port, a deepwater oil export terminal, reopened on Wednesday. Oil and gas producers also began returning workers to offshore platforms. A fifth of the 149 Gulf of Mexico platforms that were evacuated ahead of the storm had restored crews by midday, the Interior Department said.

Shell also reduced production at its 227,400-bpd Norco, Louisiana, refinery, according to people familiar with the matter. Shell did not comment on Norco’s status.

Phillips 66 said it was advancing planned maintenance on its 255,600-bpd Alliance, Louisiana, refinery and would keep processing halted.

There were 1.1 million bpd of U.S. Gulf Coast refining capacity offline on Wednesday, according to the U.S. Energy Department, including two plants under repair since Laura and another halted by weak demand due to the COVID-19 pandemic.

U.S. crude and gasoline futures soared 5% on the storm impact, an unexpected drop in U.S. crude stocks and a larger-than-expected draw in motor fuel inventories.

“Even if the weather keeps production shut for a couple of days, the sheer volume of its size is enough for the market to breathe a bit,” said Rystad Energy senior oil markets analyst Paola Rodriguez-Masiu.

The Colonial Pipeline, which brings fuel from refineries to the U.S. East Coast, was operating normally, its operator said.