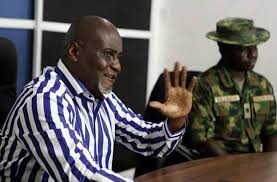 06 April 2018, Sweetcrude, Abuja – Newly-appointed Coordinator of the Presidential Amnesty Programme (PAP) and Special Adviser to the President on the Niger Delta, Prof. Charles Dokubo, has said his predecessor left scanty handover notes which gave little or no guidance about their activities at the Amnesty Office.

Speaking on Thursday during an interactive session with newsmen in Abuja, he described the handover note he received from his predecessor as “a maze of words and figures that left many questions unanswered.”

He said his resolve to make meaning out of the “scanty” handover note and redirect the course of the Amnesty Programme informed his decision to set up a Special Review Committee made up of four experts outside the Amnesty office and four senior officials that worked with his predecessor.

The members of the committee include Prof. Ayibaemi Spiff, Chief Otonye Amachree, Mr. Unyime Isong Eyo, Ms. Azizat Muhammed, the Director of Finance and Accounts, the Director of Procurement, Director of Administration and the Head of Audit.

Dokubo replaced Brig.-Gen. Paul Boroh (rtd.), who was removed over allegations of corruption and is currently being investigated by the Economic and Financial Crimes Commission (EFCC).

Dokubo said the committee, which was inaugurated before the media parley, is at liberty to not on dissect the handover note but also has full authority and mandate to “take oral depositions or seek clarifications from any person or persons including current departmental heads.”

“The documents contain a maze of words and figures. I dare say, however, that these documents left lots of questions unanswered. So I have set up a committee to give me a guide that would take the Amnesty Programme to a different level.”

Speaking on his mandate, Dokubo said he would focus more on the reintegration aspect of the programme, adding that he would not accommodate new entrants into the programme which should be winding down in due course.

“My focus is on reintegration. How do we get jobs for those who have been trained here such that they would no longer live on stipends? I wish to use the opportunity of the inauguration of the committee to underscore the compelling need to recalibrate and reboot the Amnesty Programme to meet current realities in the Niger Delta and Nigeria at large,” he said.

The new PAP boss noted that the terms of reference of the committee include, among others, to take a critical look at the handover note and ascertain the current status of the programme; ascertain current level of compliance with the original mandate of the programme; and review all contracts awarded by the Amnesty Office since 2015 with a view to determine the levels of word done, monies paid, beneficiaries and extent of work done and recommend a payment schedule for only those qualified to be paid.

The committee, he noted, has two weeks within which to submit its report, noting that noting that the member should also look into the data base of the Amnesty Office to establish its sanctity, carry out a personnel audit of the staff and their suitability for the positions they currently occupy and determine the real status of all ongoing vocational, educational and post-training empowerment programmes of the office within and outside the country.