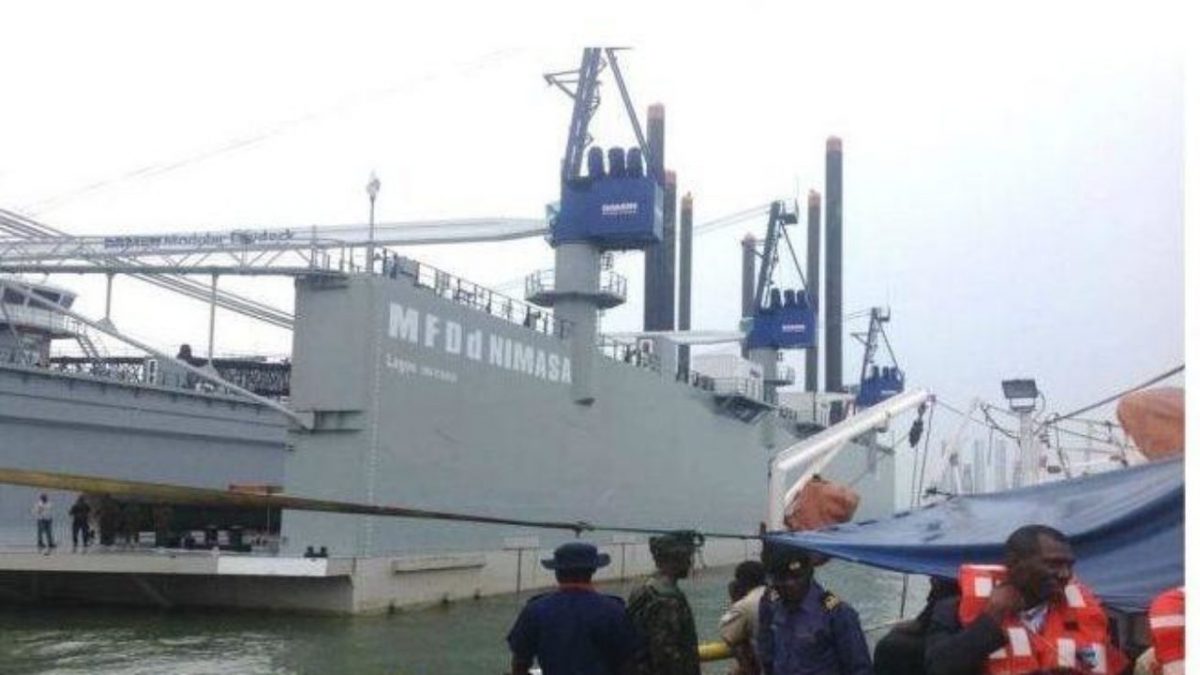 Lagos — In a bid to get value from the floating Dock acquired by the Nigerian Maritime Administration and Safety Agency, NIMASA, the Infrastructure Concession Regulatory Commission, ICRC, has issued a Certificate of Compliance to the agency for an outline Business Case, OBC for the operation of the Modular Floating Dockyard.

Speaking at the presentation ceremony in Lagos, Acting Director General of the commission, Mr. Michael Ohiani, who led a team of ICRC officers to the NIMASA headquarters said that the Modular Floating Dockyard’s management contract is to be operated, maintained, and transferred under a Public Private Partnership, PPP, arrangement was in compliance with the ICRC Act 2005 and the National Policy on Public Private Partnership.

Ohiani also described the Floating Dockyard as a profitable investment by government. He, however, noted that only deployment based on due diligence and effective implementation of the approved business case would ensure the durability of the project.

He stated, “The project is bankable and sustainable. The Nigerian government will get value for money in the project. The next step is to get the best concessionaire to provide the services and a full business case will be prepared and taken to the Federal Executive Council (FEC) for approval.

“ICRC will continue to manage the process and we hope to conclude the entire process before the end of the year. We will also ensure that the concessionaire does not charge arbitrary fees when it becomes operational. It is a total package we are delivering to Nigerians and we seek their understanding and patience.”

Speaking in similar vein while receiving the Certificate of Compliance, Director General of NIMASA, Dr. Bashir Jamoh, said the Modular Floating Dockyard was a national asset assuring that the Agency was committed to the careful deployment of the dry dock in line with relevant regulatory instruments to ensure wealth creation, job creation, and revenue generation for the Federal Government.

Jamoh also said issues, such as security, accessibility, and existing complimentary infrastructure on ground, were considered in the development of a business case for the dockyard, which will be managed on a PPP basis with NIMASA and the Nigerian Ports Authority (NPA), on the one hand, and a management company, on the other. ICRC would closely monitor the entire implementation process to ensure equity, fairness, and profitability for the Federal Government.

He stated, “It is one thing to have the Modular Dockyard, and another for it to enjoy patronage and be a profitable venture for government. So many funds have been invested in the project and it cannot serve just as a workshop for an institution of learning, as being inferred in some quarters.

“Detailed investigation has also confirmed that the dockyard cannot berth at an area earlier proposed for it. We got approval from our supervising ministry to deploy the asset on a PPP basis and we are working in conjunction with the Nigerian Ports Authority. Our arrangement to utilize facilities at the Continental Shipyard in Apapa is still very much on course.”

The agency boss stated that the seeming delay in the deployment of the Floating Dockyard was due basically to the fact that attention was being paid to details to ensure due diligence, compliance with due process and n the eventual durability of the project when it becomes operational.

“The floating dockyard is a national asset and we consulted the ICRC, which is the regulatory agency of government, to review the process of deployment to confirm that it is a worthwhile investment on a PPP arrangement, and today they have confirmed to us that we are on the right path,” Jamoh added.