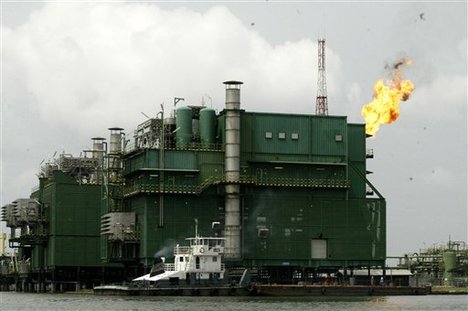 WARRI- PLACARD-CARRYING protesters from Ijaw oil-bearing communities in Warri South-West Local Government Area of Delta state have laid siege to the Odidi II flow station operated by the Shell Petroleum Development Company, SPDC, over the sale of Onshore Mining License, OML 42 in their area to a non indigenous entity allegedly against the provisions of the Local Content Act.

The angry protesters who condemned the Nigerian Government and the company for the sales carried placards, some of which bore the inscriptions, ‘Federal government should stop this injustice’, ‘Indigenes are capable to buy OML 42 and manage it properly’, ‘Don’t mortgage our future, don’t mortgage our life’, and ‘’Oil producing communities say no to sale of OML 42 to non-indigenous companies’.

Chairman of the Owners of Oil of Gas and Gas Producing Communities, Western division, Dr. S.Y. Mamamu explained that the communities were opposed to the purported sale of the oil facilities as such transaction totally negates the provisions of the Local Content Act.

He stated that the communities would consider the option of going to court to seek a redress if the government and SPDC failed to backpedal on the sale of the oil bloc, as according to him, the sale runs contrary to the local content policy of the federal government.

Mamamu noted that if the federal government and SPDC were still interested in divesting OML 42 , the host communities should be given the ‘first opportunity to buy, not a non-indigenous entity that does not feel the adverse effect of oil exploration’.

‘We shall not allow the purported buyers to take over the management in our communities’, he said.

“We have opposed to a local content policy that is tantamount to neo-colonialism. A situation where foreign multinationals will divest their interest from oil facilities and Nigerians from other part of the country will take over such assets to the detriment of the indigenes of the areas is totally unacceptable and will be vehemently resisted.”

Mamamu reiterated that the non participation of indigenes of oil producing communities in the decision process led to the Niger Delta struggle, which had claimed many lives and property.

Throwing his weight behind Mamamu, chairman, Ajuju community, Favour Izoukumor, alleged that oil and gas bearing communities were marginalized by the Anglo-Dutch oil giants, and expressed worries the new investors would likely toe the same line.

“It is obvious that there is no single sign that the multinationals are really working here in terms of development. We don’t want to take the law into our hands. We will continue to use civilize mean to prosecute our agenda. But if the federal government and Shell go ahead with the divestment, we will go to court,” he asserted.