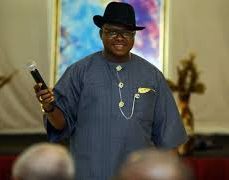 Port Harcourt — A former Managing Director of the Niger Delta Development Commission, NDDC, Chief Ndutimi Alaibe, on Thursday assured that he would turn Bayelsa State into a maritime hub if elected governor.

Alaibe who is also the pioneer Coordinator of the Presidential Amnesty Programme for repentant Niger Delta militants also said he would deploy the amnesty template to tackle insecurity in Bayelsa if elected in the November gubernatorial election in the state.

He explained that his desire to join the Guber race in Bayelsa was to ensure that government platform is used for economic development and prosperity for the benefit of the people of the state.

He said that he will blend his private and public sector experiences to use investment capital to drive the development of infrastructure in a sustainable manner.

According to him, “The rate of crime in Bayelsa is of great concern to me as a parent and I have done it before, this is not a time to apportion blames, and somebody has to take responsibility to reform the youths because they are our children.

“My plan for the state is very detailed and robust anchored on unlocking the maritime potentials of Bayelsa to create jobs and wealth. The idea is to augment to revenue accruable to the state with investment capital.”

Alaibe further said his blueprint for youth development would address the challenges of cultism and drug addiction which fuel crime amongst the youths.

He said it was during his tenure as NDDC Managing Director that the 97.6 kilometer Ogbia-Nembe road jointly funded by government and the Shell Petroleum Development Company, SPDC, was conceptualized.

“We need to disarm them, demobilize, rehabilitate and reintegrate them into the society and with my inherent capacity to solve social problems, this can be tackled in six months.

“I shall be unveiling my plans to the people of Bayelsa as well as the key payers in the economy as soon as I return my nomination forms ahead of the September 3rd primaries of the Peoples Democratic Party.”