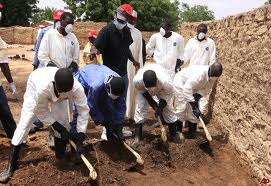 The 2,000 children under five have shown signs of lead levels in the blood far exceeding international standards due to exposure to lead-rich gold ore, with some areas yet to be cleaned up despite repeated warnings.

They live in villages in Zamfara state where lethal levels of lead poisoning were reported in 2010 due to illegal gold mining. Lead has been dispersed in the villages by the processing of ore for gold extraction.

“There are 2,000 children suffering from lead poisoning in eight lead-contaminated villages yet to be remediated,” said Nasiru Tsafe, deputy coordinator of Zamfara state’s rapid response team.

“These children are exposed to more danger by their constant exposure to lead and delay in treatment.”

Jane Cohen, a researcher with New York-based Human Rights Watch who visited the area recently, said the situation was worse than anticipated with “a large number of children exposed to high lead contamination well above the WHO (World Health Organisation) accepted limit.”

Most of the victims are from Bagega village, a 9,000-strong farming and herding community where all 1,500 children suffer from lead poisoning.

“Bagega provides the worst challenge because it is more than the size of all the other seven villages combined and all the over 1,500 children in the village suffer from lead poisoning,” Cohen said.

The short-term effects of lead poisoning include acute fever, convulsions, loss of consciousness and blindness, with anaemia, renal failure and brain damage among the long-term effects.

“The immediate thing to be done is remediation, because there is no point treating a lead-poisoned child who goes back to a contaminated environment where he is exposed to the same contamination,” Tsafe said.

Remediation work has been stalled since March due to a shortage of financing, which forced TerraGraphics, a US-based engineering firm that has been carrying out the cleanup, to move out.

TerraGraphics targeted 15 badly contaminated villages for remediation and had cleaned up seven with $2.3 million (1.6 million euros) in donations before it ran out of cash.

In a February memo to the Zamfara state governor obtained by AFP, Ian von Lindern, head of TerraGraphics, noted that Bagega’s remediation would require “more sophisticated engineering” and would cost at least $2.2 million.

This was due to Bagega’s size and the residents’ use of lead-contaminated mud in building homes, “requiring consideration of building and wall demolition,” Lindern said.

“The entities that provided monies for remediation have indicated that similar levels of funding will not be forthcoming for Bagega,” Lindern said in the memo.

Contacted by email on Friday, Lindern said the “information is correct but the cost is now $3.0 million because it includes a large contaminated industrial area adjacent to the village.”

He said TerraGraphics had submitted a proposal together with France-based medical charity Doctors Without Borders and others to the Nigerian government for a combined programme of remediation, medical treatment and safe mining practices.

Cohen of Human Rights Watch said that “remediation in Bagega is critical and urgent as a precondition for treating the children.”

She said Doctors Without Borders was running clinics and treating children, but cleanup was vital to keep victims from being poisoned again.

Local communities had initially largely concealed or denied the fatalities and illnesses from lead poisoning for fear that authorities would ban their mining activities, a Doctors Without Borders official has said.

Illicit gold mining is more lucrative than agriculture for the impoverished farming communities.