on: November 16, 2017In: Community Development, featured 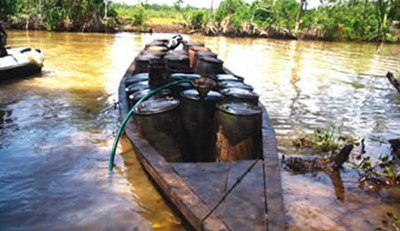 *Movement of illegally refined automotive gas oil in the creeks of the Niger Delta.

16 November 2017, Sweetcrude, Port Harcourt — The Movement for the Survival of the Ogoni People, MOSOP, has condemned the alleged killing of three youths of Luebe Community in Ogoniland, by men of the Nigeria Police, for daring to intercept the movement of stolen petroleum products through the area.

MOSOP alleged that the youths were shot dead by the Police when they attempted to stop them (Police) from escorting the illegally acquired petroleum products through their community en route Ndoki in Oyigbo Local Government Area of Rivers State.

Publicity Secretary of MOSOP, Mr. Fegalo Nsuke, regretted that the economic crime of crude oil theft, pipeline vandalism, illegally refining of petroleum products and bunkering was is enjoying the protection of the Nigerian Police.

“Our checks reveal that the youths have attempted to stop the police from escorting illegally-mined petroleum products through their community en-route Ndoki in Oyigbo local government area of Rivers State.

“The Luebe killings is very regrettable not only because the youths have risen against the pipeline vandalism masterminded and prosecuted by men of the Nigerian police, they have also shown that the crime for which the government and Shell has accused the Ogoni community is a crime by a criminal gang that is enjoying the protection of the Nigerian Police.

“The Ogoni people are disheartened that the killing of our people by state security and the policies of government is dangerously and increasingly pointing to a deliberate state-backed genocide against our people.”

Fegalo Nsuke called on the Federal Government to properly investigate and prosecute any erring police officer involved in the Luebe killings and demanded an end to what he described as mindless and seemingly deliberate killing of Ogoni people by Nigerian security forces.

“We note with regret, the impunity that characterizes the killings and abuses perpetrated by Nigerian security forces against the Ogoni people.

“Very recently, over 35 persons were killed in Ogoniland in a military raid preceding the last re-run elections. The National Assembly launched a probe into the incident, the report has not been made public.

“Last month, precisely on October 6th, Nigerian soldiers shot at peaceful protesters in Tai, no one has been held to account for the shootings nor has Shell, the company that sponsored the shooting and several others ever been questioned over her activities in Ogoniland.

“We expect the security forces to protect our people and not kill them, we, therefore, want to make clear, our strong disgust against the impunity that has characterized human rights abuses by security men in Ogoniland and demand an end to this.”

When contacted through the telephone, the Rivers State Police Command, explained that the matter was under investigation.

When probe further, the Police Public Relations Officer in the state, DSP Nnamdi Omoni, said it will be improper to pre-empt since the mater was already under the investigation.

“Let’s no preempt the outcome of the investigation.”