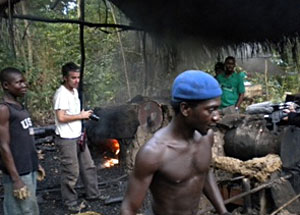 25 September, 2011, Sweetcrude, Port Harcourt- About 16 illegal refineries have been discovered within Imo River Field operations of the Shell Petroleum Development Company in Abia State, causing the company to shut down production of 25, 000 barrels of oil per day since August 28th, 2011.

The action aims at starving the thieves of crude oil feedstock to prevent further environmental pollution. The crude oil theft and unprecedented upsurge in illegal bunkering and refining are said to have severely impacted on rivers around Akwete, Abia and Rivers States.

Vice President Health Sector and Corporate Affairs Mr. Tony Attah in a statement to Vanguard, Weekend, said “the scale of crude theft in the area was alarming. Aside from revenue loss to government and other stakeholders significant portions of the stolen crude are spilled, blighting large swathes of the ecosystem”.

Imo River Field, according to Attah, “straddles Abia and Rivers States and has five flowstations, a gas compressor station and several kilometres of pipelines among other facilities. Security forces moved-in two years ago dislodging the thieves and destroying dozens of barges and canoes.

But the criminal activity has recently resumed with crude thieves inflict hacksaw cuts on pipelines to siphon crude into waiting flotilla of barges and canoes some of which can hold as much as 40, 000 barrels of oil”.

Attah explained that the leadership of Ukwa West Local Government, Abia State House of Assembly members and the department of petroleum resources had been engaged to intervene in the scourge of the illegal bunkering and crude theft.

It was gathered that the large volume barges and “Cotonu Boats” filled with stolen crude oil collected from trunk lines are most times enroute to discharge into ocean going vessels and other high volume crude oil end users.

Scores of rivers in Rivers State, particularly in Ogoniland have been polluted by oil in recent times, but most of the spills have been traced to pipeline vandalization, illegal bunkering, refining and sometimes system failure.