on: October 02, 2012In: Community Development, featured 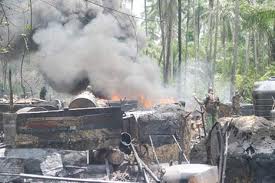 02 October 2012, Sweetcrude, YENAGOA – “WE thought we were under military siege and some of our people fled their homes when they saw the armada of boats and armed soldiers heading towards our community,” said John Oweikorogha (not real name), an indigene of the oil-rich Igbomotoru community in the Southern Ijaw Local Government Area of Bayelsa State.

This was the stark reality in the troubled enclave when heavily armed operatives of the Joint Task Force in the Niger Delta, codenamed Operation Pulo Shield, were at the weekend deployed in the area.

The massive movement of the troops, it was learnt, caused serious panic among indigenes of the area who thought their community was under military siege given the quantity of war arsenal involved in the deployment.

The battle-ready troops were on a mission to open a new outpost at Igbomotoru, which is notorious for illegal bunkering.

Many sea-going vessels have been discovered to use the area as hide out where they carry out trans-shipment of illegally siphoned crude oil. Also, its mangrove swamp is littered with illegal refinery camps.

Investigation revealed that the area, though rich in oil, is badly polluted and deeply impoverished with offensive stench being the hallmark of its waterway, and thick poisonous smoke taking over the air, making visibility in the snaky creek difficult for maritime operators.

But in a renewed effort to stem the tide, the authorities established a military outpost in the creek which necessitated the massive deployment of troops in the area.
The mandate of the soldiers, it was learnt, was to rid the area of crude oil thieves and illegal refinery operators.

The troops led by one Major Augustine Obochi on establishing their presence in the area launched a dawn raid on the identified illegal refinery depots last Saturday, destroying about 30 camps and 29 Cotonou boats used in conveying stolen crude oil and their illegally refined petroleum products to waiting sea going vessels.

The decision to establish permanent military presence in the blighted enclave, it was learnt, was the outcome of a recent security meeting involving the services chiefs held at the instance of President Goodluck Jonathan.

The President was reportedly unhappy with the state of affairs in the creek of the Delta and directed the military to dismantle the camps.

Sources from the Igbomotoru creek said they were jolted from their sleep by the booming sound of explosion in the early hours of Saturday.

According to him: “We thought we were under military invasion given the sound of explosions coming from the forest”.

Continuing he said: “Some of our fishermen who saw the armada of boats in the waterway heading towards our community were forced to beat a quick retreat for fear that the soldiers were out to attack the community.”

He, however, declared that their fear was misplaced as the soldiers went about their mandate without harassing anybody.

The troops backed by gunboats, he said, used the smaller watercrafts to access the narrow inlets to reach the camps being used by crude oil thieves and illegal refinery operators to ship their illegally acquired consignment.

When contacted, the Media Coordinator of the Joint Task Force, Lt. Col Oyeama Nwachukwu, said the renewed onslaught was part of the on going effort to cripple the activities of crude oil thieves and illegal refinery operators in the region.
He also confirmed the establishment of a military base in the area to effectively secure the creek to prevent the dislodged illegal refinery operators and crude oil thieves from returning to the sacked camps.

His words: “Following the deployment of troops in the area, aggressive raid was conducted and several illegal refinery camps were destroyed.

“Igbomotoru enclave is noted for its notoriety in illegal bunkering because most sea- going vessels have been discovered to use it as hide out where they do their trans-shipment of illegally siphoned crude oil. The operation continues until we rid Igbomotoru of oil thieves. We will not be stopped by false hue and cry”.

Nigeria is one of the world’s largest oil producers, but the Niger Delta region remains badly polluted and deeply impoverished.

Oil firms blame theft and sabotage for the majority of oil spills in Nigeria, a claim strongly disputed by environmental activists.

A recent trip to the creek of Southern Ijaw was an exposure to the glaring despoliation of the environment by the natives driven by self-interest and profit maximization.

Ironically, the very river most of these communities depend on for drinking is daily being polluted by the illegal refinery operators, some of whom carry out their illicit trade brazenly pumping the excess of their illegally acquired consignment into the river in broad day.

Sadly, only about 30 per cent of the refined oil is recuperated according to report, while the remaining 70 per cent is discarded into the environment.

The country, according to an oil industry source, is losing about N15.8billion daily to oil thieves operating in the mangrove creeks of the Niger Delta who are not only bleeding the economy but also compounding the woes of the already fragile environment.