I’m not interested in buying NLNG, other national Aassets – Dangote 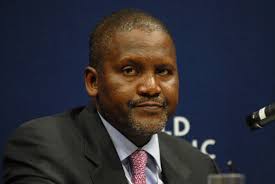 05 October 2016, Lagos – Following the outcry that has trailed the advocacy for the sale of the country’s national assets as a quick measure to fund the 2016 budget and boost the country’s foreign exchange reserves, the President/Chief Executive of Dangote Group, Alhaji Aliko Dangote, has dismissed insinuations that his advocacy for the sale of the assets was self-serving, saying he was not interested in any of the assets.

Dangote, who spoke in an exclusive interview with THISDAY, stressed that if the Nigeria Liquefied Natural Gas (NLNG) Company or any other national asset was offered to him, even on credit, he would not be interested in acquiring them.

Dangote, who is Africa’s richest man, said his advocacy for the government to sell down some of its interest in some of the national assets was to help boost the economy as well as to stabilise the naira exchange rate, which has been under attack in the past few days.

According to him, he offered his proposal as a way out of Nigeria’s present economic recession because he is “a true Nigerian who really wants the issues about the economy to be sorted out”.
He added: “You know the issue, once your reserves are low, the banks, entrepreneurs, including external forces, would definitely attack your currency. They would speculate on your currency.

“But the issue is, why did I suggest that we should sell some of the assets? I know the touchy one is the NLNG. I want to make it categorically clear that even if the government is selling NLNG on credit, I am not interested in buying.

“I don’t have any interest in NLNG and I will not buy it. It is not a business that I want to invest in. It is a mature business; that is what people don’t understand.

“You see, we should have invested heavily in all these Brass LNG, Olokola LNG, etc, when former President Olusegun Obasanjo started work on the projects, but we missed the opportunity.

“Today, you have massive LNG projects that have been done by Qatar, Australia and the United States is also exporting. But right now, all the gas that we have is even in the ground. Even Mozambique has a massive amount of gas and also Tanzania, and they are nearer to the markets than we are.

“So, if somebody is even going to invest in LNG, he would go to those areas and invest there and not here in Nigeria, because the investment here daunting. So my own suggestion is that even if we must sell, it doesn’t have to be 100 per cent of our interest in NLNG.”

Dangote maintained that even if NLNG was bringing in $1.5 billion into the federal government’s coffers, once the government reduces its stake in the company and it is run more professionally, Nigeria would generate more funds from it.