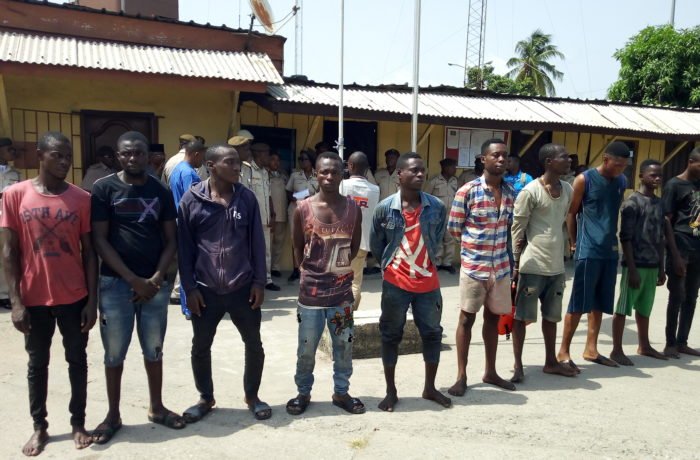 The Comptroller, Lagos Seaports and Marine Command, Modupe Anyalechi, while parading the suspects at Apapa before newsmen said, “Five of the stowaways were apprehended on Sunday at 4pmby officers and men of the Command on board MV MSC Paola at fairway buoy about six nautical miles to finger jetty in Apapa port.”

Anyalechi said in the cause of rummaging the vessel, five suspects were discovered inside the rudder truck, while the other five suspects were arrested on board Maersk Chennia by the Navy and handed over to NIS by NNS Beecroft on Monday.

She said, “Unknown to the suspects, some of the vessels are coastal whose activities are limited to West Africa and the Gulf of Guinea.”

She said nine of the stowaways are Nigerians while one claimed to be a national of Niger Republic. Those arrested aboard MSC Paola are Erukudami Musa Moses, Messem Nasuru (Nigerien), Wessey Kelvin, Odiyeye Abiye and Popoola Orife, while those arrested aboard Maersk Chennai are Agba Ifeanyi Victor, Kelly Onikan, Pope Ekele, Odogwu Michael, and Asumah Ukpere.

“In line with the mission of the Comptroller-General of the Immigration Service, Mohammed Babandede, to curb the menace of illegal migration by our teeming youths through air, land and sea borders, the command has made it almost impossible for the stowaways to access the vessels from the quayside,” Anyalechi further stated.

One of the suspects, Asumah Ukpere who hails from Delta State, told ‘Ships & Ports Daily’ he thought the ship was going to Europe.

“So I got into the vessel through the assistance of fishermen when paddling their canoe and entered through the propeller,” he said.

Another suspect, Kelly Onikan told Sweetcrude that he boarded the vessel to “search of greener pasture in Europe”.