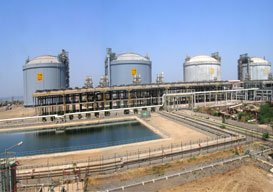 “The tendering process (for the construction of the LNG tank) is in advance stage,” Petronet LNG said in its 2017-18 annual report.

Petronet also said that it commissioned a feasibility study for the third jetty at the Dahej terminal “for better reliability of LNG ship receiving system.”

The Dahej facility is India’s first and largest such facility. It currently has four 148,000-cbm and two 170,000-cbm LNG storage tanks.  All of these tanks were built by Japan’s IHI.

Besides the addition of the seventh tank, Petronet is also expanding the terminal’s regasification capacity from 15 to 17.5 million tonnes per annum.

“Regasification unit of 2.5 MMTPA at an approximate cost of Rs.415 crore is being added without raising any external debt,” it said.

The expansion project is expected to be commissioned by end of 2018-19.

In the financial year 2017-18, the total throughput at the Dahej terminal reached 16.03 million tonnes, compared to 13.13 million tonnes in the previous year, as demand for the chilled fuel was robust, Petronet noted in the report.