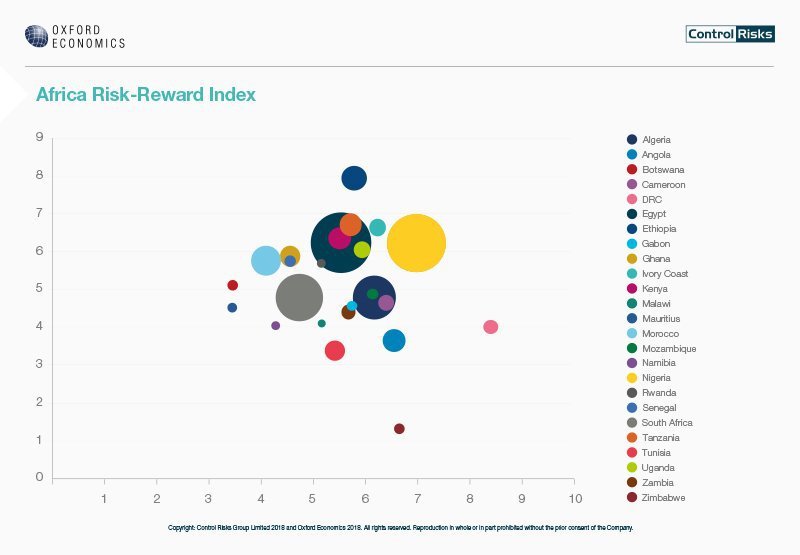 Ghana leads these positive developments for West Africa, recording the strongest improvement in its risk-reward score in Africa, after Zimbabwe and Egypt. Both Nigeria and Senegal benefit from a greatly improved risk score.

“In 2017 many West African governments have embarked on an impressive journey to implement the right reforms for economic growth and improvement of investors’ confidence.

“Since coming to power in January 2017, Ghana’s government has continued to undertake a programme of macroeconomic reforms which have focused on reducing the deficit and external debt. In the last year, this had a particularly positive impact on issues such as credit and exchange risk. At the same time, Ghana has attempted to improve the business environment for investors by reducing the bureaucratic and taxation burden, as well as laying out plans for further investment activity in the oil and gas and manufacturing sectors.

“In Nigeria, the recently initiated Economic Recovery and Growth Plan has begun to tackle some of the economy’s challenges, including corruption and an infrastructure deficit. The plan has also sought to remove bottlenecks to improve the ease of doing business, which in turn boosts investors’ confidence.

“In the last three years, Senegal’s Emerging Senegal Plan has already led to steady growth, reaching close to 6.4% in 2017. The reduction in its risk score is one of the most positive changes in the 2018 Africa Risk-Reward Index and can be explained by structural reforms to improve the business environment, strengthened macroeconomic fundamentals and a controlled debt management policy.”

Further findings of the report:
Angola’s leadership change has not yet improved its reward score, but its risk score has gone down: Angola’s new president, João Lourenço, has acted with remarkable speed and decisiveness to consolidate his authority. Efforts to dismantle his predecessor’s networks have provided new opportunities for foreign investment in sectors previously dominated by companies linked to the former president and his family. Combined with an improved regulatory environment, investors can seek opportunities predominantly in the oil and gas, diamond, and telecommunications sectors.
Reward score: 3.65 / risk score: 6.55

Kenya’s reward score remains one of the highest in sub-Saharan Africa, but the government’s external debt burden raises concerns: Winning the election in 2017, Kenya’s leading Jubilee Party of Kenya continues its pro-business policies. However, concerns arise over the government’s external debt burden, with a new USD 2bn Eurobond issued in February even as the proceeds of a previous issue have yet to be fully accounted for. Furthermore, improving relations between the government and the opposition will be instrumental in ensuring that political tensions do not undermine economic growth, and more prudent fiscal and macroeconomic policies are needed to maintain positive economic prospects. Reward score: 6.36 / risk score: 5.51

Côte d’Ivoire, with a forecasted real GDP growth rate of 7% in 2018, continues its impressive economic recovery, but great challenges remain: With reforms to the business environment and efforts to bring foreign investors back after the 2010-2011 crisis, Côte d’Ivoire has achieved amongst the highest growth rates in the world in recent years, and sectors such as construction, telecommunications, banking and retail have seen considerable growth. However, severe obstacles to a full recovery persist, including political interference and corruption, socioeconomic discontent, shortcomings in security-sector reform, and growing competition ahead of the potentially volatile 2020 presidential poll.
Reward score: 6.51 / risk score: 6.24.

Senegal – growing investment and a reduced risk score presage continuous growth: Under the Emerging Senegal Plan, growth has increased steadily over the last three years, reaching close to 6.4% in 2017. Growing exports, a more diversified economy and increased interest from large international investors as a result of the promising offshore oil and gas discoveries make Senegal one of the poster children in sub-Saharan Africa. The reduction in its risk score is one of the most positive changes in the 2018 Africa Risk-Reward Index. Reward score: 5.76 / risk score: 4.56

Morocco – economic reforms improve the country’s resilience and make its exports more competitive, but social discontent remains a challenge: With one of the lowest risk scores on the 2018 Africa Risk-Reward Index and a relatively stable reward score, Morocco’s economic reforms prove to be a success. Medium-term growth will be enhanced by continued reforms to facilitate foreign investment, access to finance, quality of education and the business environment, as these represent the primary constraints to competitiveness and doing business. However, social-economic unrest over poor living conditions persists, particularly in interior regions. Reward score: 5.77 / risk score: 4.10