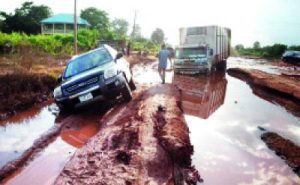 Port Harcourt — The Independent Petroleum Marketers Association of Nigeria, IPMAN, has threatened to withdraw services in Rivers State, if the federal government fails to commence the reconstruction of the failed portion of Eleme axis of the East-West Road in 14 days.
The Eleme section of the East-West Road hosts major national assets, including Indorama-Eleme Petrochemicals Limited, Port Harcourt Refining Company, Nigerian Navy Training College, Nigerian Port Authority, and the Oil and Gas Free Zone Authority, which hosts hundreds of oil, gas and maritime logistics companies.
The 5km road, which also connects Rivers, Akwa Ibom, Abia and Cross River states, has been in a deplorable condition for over 10 years amidst calls by various stakeholders on the federal government to fix the road.
IPMAN Chairman in Rivers State, Dr Joseph Obele, said the 14-day ultimatum was imperative in order to save the lives of petroleum marketers and ordinary Nigerians who ply the deplorable road on a daily basis.
Obele, who is also the governorship candidate of the AAC in Rivers State, expressed regrets over the accident which claimed eight lives recently due to the dilapidated nature of the road.
“The deplorable state of the Eleme East-West road is now a serious concern to the safety of the people of Rivers State. It is necessary to  give an order to petroleum Marketers to suspend distribution and lifting of petroleum products to saved lives and properties of Rivers people.
“Imagine the trailer with container that fell three days ago on the bad spot of the road, killing about eight passengers in a bus, just imagine if it was a truck of petroleum products.
“I hereby give which ever ministry in charge of the project 14 days to commence action on the road, otherwise we will call for emergency conference of petroleum marketers to order the suspension of supply and distribution of petroleum products in Rivers State until that road is fixed.
“Rivers people should bear with us, as it is for their own good and love I have for the people of Rivers State,” the IPMAN boss said.