01 September 2018, Sweetcrude, Lagos — Iran and India are set to lead the global ammonia market capacity growth, which is poised to increase from 240.6 million tons per annum (mtpa) in 2017 to 284.8 mtpa in 2026, says leading data and analytics company GlobalData.

The company’s latest report: ‘Quarterly Global Ammonia Capacity and Capital Expenditure Outlook – Iran and India to Drive Global Capacity Growth’ reveals that around 94 planned and announced plants are slated to come online, primarily in the Middle East and Asia, over the nine-year period.

Within the Middle East, Iran plans to add a total capacity of around 9.1 mtpa by 2026 with the help of 23 planned and announced ammonia plants. Capital expenditure (capex) for these plants totals US$1.77bn over the next nine years. Major capacity additions will be from The National Petrochemical Company.

Dayanand Kharade, Petrochemicals Research Manager at GlobalData said, “Iran with its low-cost feedstock advantage and India with its rising fertilizer demand will dominate the global ammonia industry in the mid-term, with both the highest number of new projects and the largest absolute capacity expansion.”

In Asia, India has 15 planned and announced ammonia plants, with a total capacity of roughly 7.9 mtpa by 2026. Capex for these plants is US$8.1bn. Major capacity additions will be from Hindustan Urvarak and Rasayan, followed by Rashtriya Chemicals and Fertilizers. 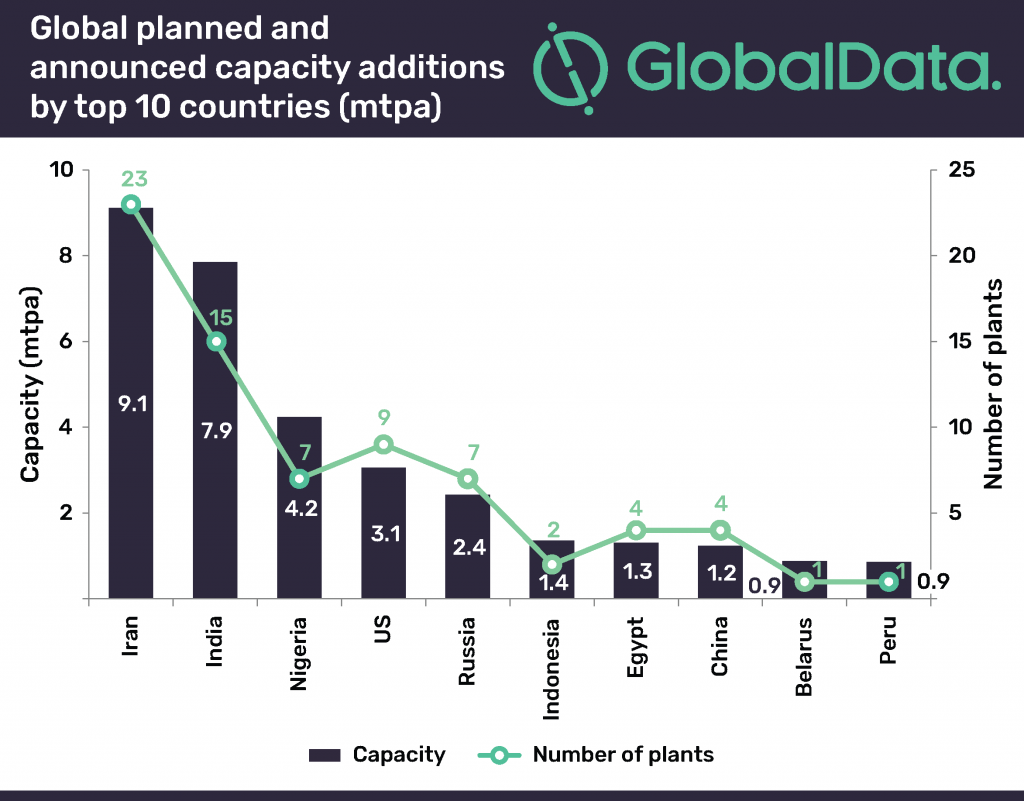 The US plans to spend US$2.31bn on nine planned and announced ammonia plants, with a capacity of around 3.1 mtpa during the outlook period. Major capacity additions will be from Cronus Corporation and Ohio Valley Resources.

Peru leads in South America with planned and announced capacity additions of roughly 0.9 mtpa by 2026. Capex for these plants totals US$0.74bn. In Africa, Nigeria plans to spend US$3.3bn to add a capacity of about 4.2 mtpa, which is expected to come on-stream by 2026.

In Europe, Slovakia and Hungary together plan to spend US$0.12bn on the addition of a capacity of 0.7 mtpa, which is expected to come on-stream by 2026.

Dangote Group, Hindustan Urvarak and Rasayan, and Rashtriya Chemicals and Fertilizers are the top three companies globally in terms of planned capacity additions over the outlook period.